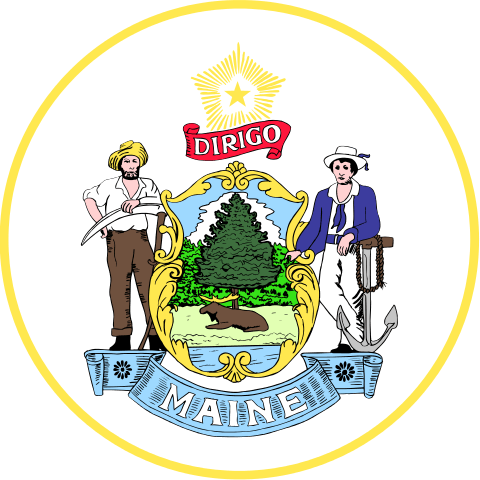 Maine is a state of the United States and part of the New England region.

The origin of the name is unclear. It is probably named after the French Maine landscape, but the name may also be a short form of “Mainland” (“mainland”). The postal abbreviation of the state is ME . Maine’s nickname is “The Pine Tree State”. The capital is Augusta. 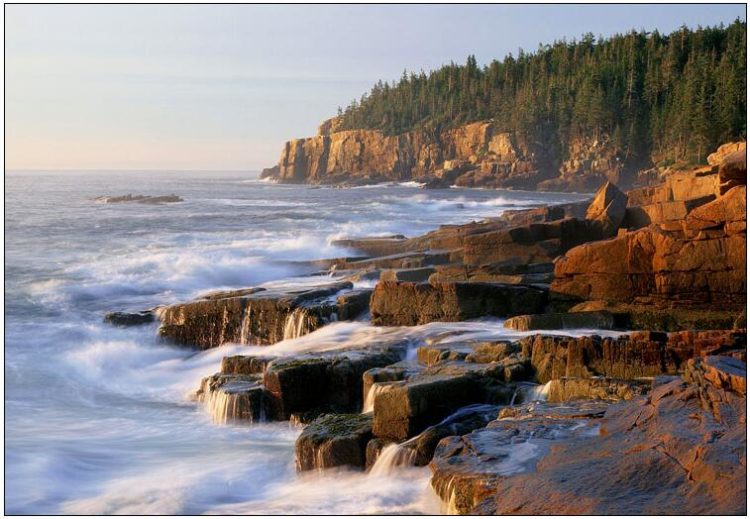 Southeast Maine is home to the Atlantic. In the northeast is the Canadian province of New Brunswick. In the northwest is Québec, also Canadian. To the southwest is New Hampshire. Maine is the only US state that borders on exactly one other state.

The highest point of Maine is Mount Katahdin (1,606 m). Maine is the US state with the highest percentage of forest. Since more than 90% of the land area is covered with pine trees, the nickname of the state is “Pine Tree State”. The scenic tranquility attracts numerous tourists. The Acadia National Park is the only national park in the area and one of the most visited in the US.

Although Maine is generally in the cool-temperate zone, it can be divided into roughly three climatic zones: The northern inland, which covers 60% of the area and has a continental climate, has comparatively warm summers for the climatic region, but also very harsh winters. The southern inland is the warmest part of Maine and is characterized by comparatively warm summers. Finally, in the approx. 30 km inland coastal area, because of the proximity to the sea, the temperatures are more moderate than inland. Hurricanes are the exception in Maine, there are seldom hurricanes, but the “coastal storms”, which bring heavy rain and wind, and sometimes snow in winter are common.

At the beginning of the 17th century, the English King James I claimed the entire territory of New England. But the first European settlers were French in 1604. In 1607 the first English settled there.

The English and French colonies fought each other. But not only the English and French fought each other. In 1642 Mohawk raided western Maine, in 1661 Abenaki killed 30 of the attacking Mohawk while trying to subjugate their territory to the Iroquois. The next year the Mohawk struck back and attacked Etchemin; almost 100 opponents were killed or taken prisoner. It was not until 1671, when the majority of the tribes had already fallen victim to severe epidemics, that a peace agreement was reached.

After the defeat of the French in the 1740s, the area east of the Penobscot fell under the nominal administration of the province of Nova Scotia.

Disputes between British and Americans then ranged from the American War of Independence to the War of 1812, which lasted until 1814. British forces occupied Maine in both conflicts.

After US independence, Maine was, although not directly adjacent, a part of the state of Massachusetts until 1820. It was separated from Massachusetts by the Missouri Compromise, which provided that the slave state of Missouri could join the Union if at the same time a non-slave state were admitted to maintain a tie in the United States Senate as the 23rd state admitted to the Union.

Maine was the first state in the northeast to support the anti-slavery movement. During the Civil War (1861-1865), the population of Maine was loyal to the Union and, in percentage terms, sent the most soldiers per state.

In the twentieth century, Maine struggled with the decline of the textile and shipping industries, making it the poorest state in the northeast.

The main products of agriculture are seafood (the Maine lobster is famous), poultry, eggs, potatoes, dairy products, stockbreeding, blueberries and apples. Industrial products include paper, wood and furniture, electronics, food, leather and textiles. Maine is the tourist area for the major cities on the American east coast.

A major tourist attraction in Maine is Acadia National Park, founded in 1929. The only national park in the New England states is one of the ten most visited parks in the USA with over two million visitors a year (as of 2003).

Located on and around the island of Mount Desert Island, it offers stretches of coastline and mountains up to 470 meters high with views of the island with its small lakes and countless smaller islands.

Maine’s coast also attracts tourists elsewhere. Sandy beaches are primarily in the south of the state at seaside resorts like York, Ogunquit, Wells Beach, and Kennebunkport ; the water temperatures are around 12-14 ° C even in summer. Rocky sections predominate further to the north.

Maine has over 40 state parks and state historic sites that boast over two million visitors annually.

Also known as Pine Tree State, Maine is short for ME with a population of 1,274,923. According to Countryaah, the capital city of Maine is Augusta and the biggest city is Portland.