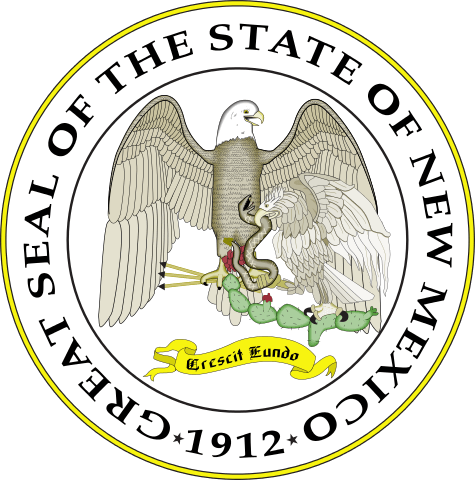 New Mexico is a state in the southwestern United States. The name comes from the Spanish conquerors who used it to designate the land west and north of the Rio Grande.

The wealth of landforms, the clear air with the mostly blue sky and the varied colorful rocks are characteristic of New Mexico. New Mexico (abbreviated NM) is therefore also called the Land of Enchantment (Tierra de Encanto).

With an area of ​​314,915 km², New Mexico ranks fifth among the 50 US states. Only Alaska, Texas, California and Montana are bigger. This makes New Mexico about the size of Poland. 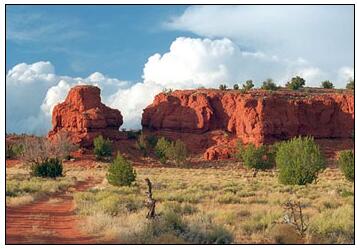 All of New Mexico is characterized by its location on a plateau. However, this is not uniform, but the transition area of ​​four geological provinces in North America. From the east the terrain rises flat out of the high plains prairies.

From the northwest the Colorado Plateau rises to New Mexico and in the north the Sangre de Cristo Range extends the southernmost parts of the Rocky Mountains to Santa Fe.

The most important river is the Rio Grande. It rises in Colorado and flows through New Mexico from north to south, past Albuquerque and Las Cruces – mostly accompanied by Interstate Highway 25. From Texas, the Rio Grande forms the border with Mexico and flows into the Gulf of Mexico after 2,896 km. The Rio Grande is a real lifeline for agriculture, but it is also important for the energy industry.

Because of the mainly dry climate, there are only insignificant natural lakes; of the artificial reservoirs is the Elephant Butte the most important.

Because of its southern location and the fact that it is on the leeward side (Lee is) the Rocky Mountains, the climate of New Mexico is consistently dry and very very very hot in summer. In winter, however, due to the altitude, it can also get frosty cold, especially in the north, where there is a real winter sports area in the mountains north of Santa Fe.

Long before Europeans explored the area, the area was inhabited by Indian tribes. They settled on rivers and in the hinterland. Probably the oldest continuously inhabited settlement in the United States is Taos Pueblo in the north of the state. Significant cultures, including the Anasazi and Chaco cultures, emerged in the southwestern part of what is now the United States between about AD 1000 and 1300. These cultures ended in the 13th / 14th centuries, probably due to changes in climatic conditions. Century.

Despite trade between whites and Indians, there were repeated armed conflicts, and it was not until 1780 that the first peace agreement was reached between the Indians and Spaniards. New Mexico was under Spanish rule until 1821, then under Mexican rule until 1846.

In 1848 New Mexico fell to the United States with the Guadalupe-Hidalgo Treaty. In 1853 the southernmost part of the state was acquired by Mexico with the Gadsden Purchase. Nine years later, New Mexico was briefly under the Confederate government, which, however, had to surrender the area to the Union after the Battle of Glorieta Pass.

After the Civil War, ranching became one of the most important economic drivers in New Mexico. Clashes between the cattle barons and the government culminated in a regular war that went down in history as the Lincoln County Cattle War.

In addition, the construction of the Santa Fe Atchison, Topeka and Santa Fe Railway in the 1880s and the discovery of oil in the late 19th century resulted in rapid growth in the area. Finally, on January 6, 1912, New Mexico became the 47th state in the United States.

After the development of the atomic bomb as part of the Manhattan Project in Los Alamos, the first nuclear weapon explosion in history, the Trinity Test, took place on July 16, 1945 at the Alamogordo test site, 280 km south of Albuquerque.

Agriculture (corn, wheat, millet, cotton) is only possible with artificial irrigation. Livestock is important. Oil, natural gas and potash salts, among others, are promoted in New Mexico.

Also known as Land of Enchantment, New Mexico is short for NM with a population of 1,819,046. According to Countryaah, the capital city of New Mexico is Santa Fe and the biggest city is Albuquerque.