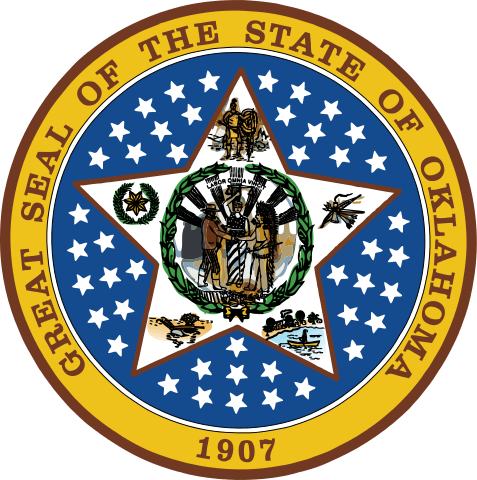 Oklahoma is a state in central south of the United States of America, north of Texas. The word Oklahoma comes from the Choctaw language: okla ‘man’ and humma ‘red’, the combination means something like “the land of the red man”. Oklahoma’s nickname is The Sooner State. The background to this epithet was the pioneers who had settled the land bought by the Indians by the US government before (sooner) the initial legal settlement period. The capital is Oklahoma City.

Oklahoma is a traditionally conservative state in which, like in Texas, the Republicans successfully inherited the legacy of democratic dominance in the southern states after the Civil War by occupying right-wing issues from the 1960s onwards. After Texas and Virginia, Oklahoma is the state in the United States that has carried out the highest number of death sentences.

Oklahoma has an area of ​​181,035 km² (20th place of the US states). The state has six neighboring states: Arkansas and Missouri in the east, Kansas in the north and Colorado in the northwest. Oklahoma borders New Mexico in the far west and Texas in the south. 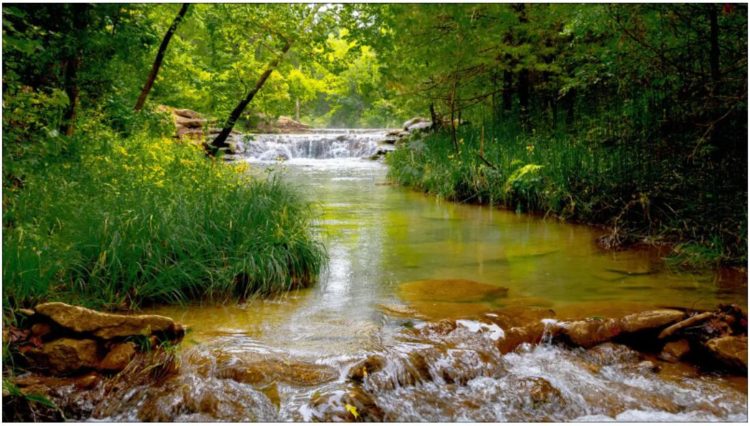 Abbreviated as OK by AbbreviationFinder, Oklahoma is largely in the Inner Plains area. The central lowland is taken up by the Osage Plains, a gently undulating plain that is only interrupted in a few places by hill country. The lowland region merges into the highlands to the east. In the northeast there are foothills of the Ozark Plateau. Rivers have dug deep gorges into this limestone massif. To the south of this plateau are the sandstone Ouachita Mountains. In the extreme southeast, the state has a share of the Gulf Coast Plain.

To the west, the Central Lowlands merge into the Great Plains. Northeast Oklahoma is crossed by the Arkansas Valley, which includes the Arkansas River and the surrounding plains. This area is very fertile and is considered one of the most important agricultural regions in the state.

With the climatic conditions in Oklahoma, it can be observed that the average rainfall – due to easterly winds that transport humid air from the tropics to the mainland, but is less dominant in the west – decreases from east to west and temperatures from south to north. The south has a subtropical climate with mild winters and hot and humid summers (effective climate classification : Cfa).

klahoma is repeatedly plagued by various natural disasters. Large parts of the state belong to Tornado Alley. The tornadoes occur when hot air from the south meets cold air from the Rocky Mountains to the north. Most often this occurs in the spring in the months of March to June.

Oklahoma holds a special position within the United States. The area fell to the United States as part of the Louisiana Purchase in 1803. However, they recognized no value in this area and assigned it between 1817 and 1830 to the Indian tribes of the Muskogee, the Seminole, the Cherokee, the Choctaw and the Chickasaw (the ” five civilized nations “), who were expelled from the eastern states. About 50,000 people were driven to Oklahoma, where they met other Indian tribes already resident. This relocation went down in history as the ” Trail of Tears “.

In 1834 the area was declared an Indian territory. Many Indian tribes still have their political headquarters in Oklahoma today.

On November 16, 1907, Oklahoma became the 46th state to join the union. After changing periods of economic growth and crisis, the discovery of rich oil and natural gas discoveries in 1928 brought the country upswing and prosperity.

Nonetheless, Oklahoma was repeatedly hit by droughts and sandstorms, which resulted in an exodus of the rural population via the legendary Route 66 to the western states. The events of the extract from the ” Dust Bowl ” were artistically processed by John Steinbeck in his novel ” Frucht des Zorns ” and by the songwriter Woody Guthrie.

As of mid-2011, Oklahoma had around 1.7 million civilians employed in the labor market, including around 1.5 million outside of agriculture. The state accounted for the most with 339,300 jobs, followed by the transport and supply sector with 279,500 jobs. In third, fourth and fifth place followed education, further trade and industry with 207,800, 177,400 and 132,700 employees.

The current economic development is extremely positive. In 2014, Oklahoma recorded real economic growth of 4.2 percent. Real gross domestic product per capita was US $ 42,670. The unemployment rate has been below the US average since at least 2001.

By the Royal Proclamation of 1763 the settlement area of ​​the European immigrants was limited to the area east of the Appalachians. However, this regulation could not be maintained for long and the settlement border of the Europeans pushed further and further west after the American War of Independence and especially after the Louisiana Purchase and the Adams-Onís Treaty.

It was assumed that the areas west of the Mississippi River in contrast to the eastern part were uninhabitable (“Great American Desert”). President Thomas Jefferson planned a settlement zone for Indians on this area.

The Mississippi was supposed to separate the immigrants who were supposed to live east of the stream from the indigenous people. Throughout the 19th century, American governments pursued the goal of crowding Native Americans into shrinking territory. President Andrew Jackson was particularly aggressive in the 1830s, under whose administration the Indian Removal Act became law in 1830 , which expelled all Indians from the territories east of the Mississippi legitimized. The relocation took place in a quasi-legal manner. Relocation contracts were officially concluded with the Indians, and no Indian was, according to the wording of the law, forced to give up their homeland.

Contrary to the promises that the land should belong to the Indians forever, the western part was opened to white settlers in 1889 ( Oklahoma Land Run ) and organized as Oklahoma Territory in 1890. In the years 1902 to 1905 there were efforts to organize the eastern part of Oklahoma as an independent new state of Sequoyah. However, these efforts met with rejection by President Theodore Roosevelt and in 1907 with the admission of Oklahoma as a state, the rest of the Indian territory was also abolished. This new Oklahoma was administered as a unitary state, the tribal governments lost their sovereign rights.

Also known as Sooner State, Oklahoma is short for OK with a population of 3,450,654. According to Countryaah, the capital city and the biggest city of Oklahoma is Oklahoma City.