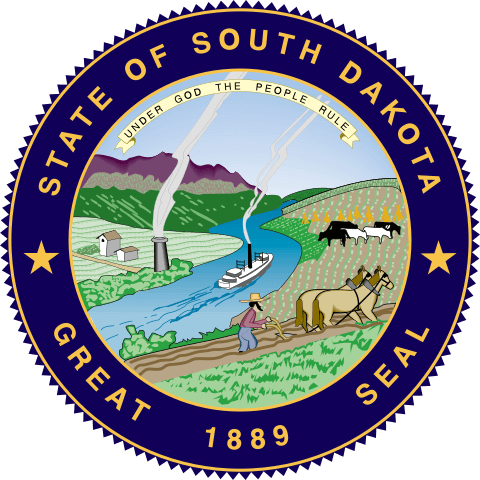 South Dakota is one of the northwestern prairie states of the United States. The largest city is Sioux Falls, the capital is Pierre. The name Dakota is derived from the Indian ethnic group of the Dakota who lived in this area before the submission by the whites.. South Dakota’s nickname is The Mount Rushmore State.

Abbreviated as SD by AbbreviationFinder, South Dakota covers 199,731 km². The Black Hills are to the west, the Badlands to the east. South Dakota is bordered by North Dakota to the north, Minnesota and Iowa to the east, Nebraska to the south, and Wyoming and Montana to the west.

The Dakota Territory was a territory of the United States. In 1889 it was divided into a northern and a southern half. These areas, North Dakota and South Dakota, were added to the United States as the 39th and 40th states.

On December 29, 1890, the Seventh US Cavalry massacred over 300 Minneconjou-Lakota-Sioux Indians at Wounded Knee. This massacre broke the last resistance of the Indians against the whites. 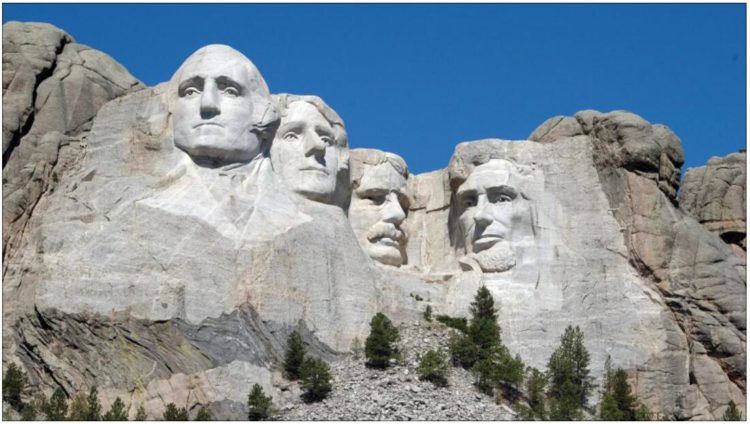 The real gross domestic product per capita (per capita GDP) – the most important indicator of prosperity – was USD 55,623 in 2016 (national average of the 50 US states: USD 57,118; national ranking: 22). The unemployment rate was 3.5% in November 2017 (national average: 4.1%). South Dakota is therefore significantly poorer than neighboring North Dakota.

The main branch of the economy is agriculture (grain cultivation, cattle farming). Gold mining in the Black Hills is also important.

Corn Belt is a name for a region in the Midwest of the USA, in which mainly corn was traditionally grown. Primarily, this corn belt includes the territory of the states of Iowa, Indiana, Illinois, and Ohio, which are responsible for approximately 50 percent of the total corn cultivation in the United States. In addition, parts of the states of South Dakota, Nebraska, Kansas, Minnesota, Wisconsin, Michigan, Missouri and Kentucky to the Corn Belt.

The Corn Belt has now become a corn, soy, pork and beef fattening belt. New varieties of hybrid maize enable cultivation to be expanded northwards, while on the other hand the state is restricting maize cultivation. The soybean, with its high yields per hectare and its high protein content, makes an ideal fodder, partly takes the place of maize. In addition to traditional pig fattening, there is also cattle fattening, in the north there is also dairy farming. Recently, however, cattle fattening has declined due to competition from large farms in the Great Plains and California.

The term grain belt has also become established for the wheat-soy growing area, which partially overlaps with the Corn Belt.

In the North American Belt System, the Corn Belt is located between the Dairy Belt in the north and the Cotton Belt in the south.

The Great Plains are a dry area east of the Rocky Mountains in North America. In terms of nature, they are the classic prairies of the American West, today they are used intensively for agriculture. They range from the Canadian ” Prairie Provinces ” ( Alberta, Saskatchewan and Manitoba) to Texas ; sometimes a small part of Mexico is included.

The Great Plains cover an area of ​​almost 2 million square kilometers and extend over a total of about 500 km. While they are still approx. 1600 m high on the Rocky Mountains, they drop to approx. 600 m to the east.

The western border is formed by the Rocky Mountains. The eastern quarters of New Mexico, Colorado and Wyoming belong to the Great Plains as well as around two thirds of Montana. On the Canadian side, the south of Alberta, Saskatchewan and Manitoba are naturally within the Great Plains.

The eastern border is defined differently. Some geographers connect all the edges of the plain, which are at a height of 600 m, and define the resulting line as the eastern border, as in the green hatched graphic above. Others draw the border further east, depending on the distribution of the high grass prairie, and consider North Dakota, South Dakota and Nebraska each to be completely part of the Great Plains. From this point of view, the north of Texas, the western half of Oklahoma, most of Kansas, the northern half of Iowa and the southwest of Minnesota also belong to the Great Plains.

The Great Plains can be divided into two climatic regions, because west of the 100th degree of longitude there is a sparse average rainfall (less than 500 mm per year), whereas the eastern region has a comparatively humid climate. Accordingly, livestock farming dominates in the west and grain cultivation in the east.

Ten US states make up the Great Plains: Montana, Wyoming, Colorado and New Mexico to the west, North Dakota, South Dakota, Nebraska, Kansas, Oklahoma and Texas to the east.

The Great Plains were sparsely populated for a long time and were roamed by partially nomadic Indians on the hunt for bison and fork jacks. Only the horses brought to America by Europeans, which came to this area in the 18th century, made it possible for the Indians to settle more densely on the prairie and to develop the Plains Indians. Some peoples profited greatly from the new way of life, bison hunting on horseback. The previously weak Lakota and Comanche, for example, quickly developed into major power factors in the Midwest. The way of life of the Plains people was strongly based on the bison. They lived in tipis that were quick to assemble and dismantle, so they followed the buffalo.

In the mid-19th century, white settlers moved west through the Great Plains. For a long time the area was considered an uninhabitable wasteland. It was not until 1865 that many settlers settled in, who initially built sod houses as a cheap first home. The population of bison fell sharply as a result of massive hunting, while the indigenous Indians were displaced into reservations until 1890.

After extensive clearing of the prairie grass and droughts, soil erosion occurred. As a result, strong dust storms were transformed in the 1930s – especially from 1935 to 1938 – parts of the Great Plains into a proverbial “dust bowl” ( Dust Bowl). This led to mass misery among the farmers, who increasingly migrated to California.

While in 1950 just under five million people lived in the Great Plains area, in 2007 that number was around ten million. However, population growth was concentrated in a few metropolitan areas, primarily in Colorado and Texas.

Settlements in the area and small towns lost a lot of inhabitants due to aging and rural exodus. Almost two-thirds of all counties were affected by the population decline, in one in five counties it was even more than 50 percent. More and more small places are turning into ghost towns.

The agricultural use of the Great Plains can be roughly divided into two areas. While to the west of the 100th longitude there is mainly intensive animal husbandry in large fattening farms with little land use and extensive animal husbandry (ranching) with very large land use, to the east of the 100th longitude arable farming is the primary form of agricultural use. Mainly summer and winter wheat as well as maize and millet are grown. The reason for this distribution is the line with the same amount of precipitation (isohyete with 500 mm), which runs almost parallel to the 100th degree of longitude and forms the limit for rain-fed agriculture without artificial irrigation.

The precipitation richer east of the area, known as the Grain Belt ( grain belt ) is also known as the granary of the United States, or as a ” breadbasket, inscribed” (bread basket) since in that region a huge surplus is earned on agricultural products.

About half of the wheat in the USA is produced in the Great Plains area, which corresponds to 68 million t for the entire USA (as of 2008), which corresponds to around 34 million t. In the western high plains, 60% of the US beef is produced, which is why this part of the great plains is often referred to as “cattle country”. As far as arable farming takes place in the west, it is usually made possible by artificial irrigation.

Increasing drought has made agriculture considerably more difficult in recent decades and mechanization and automation have made labor redundant. The Ogallala aquifer, a deep groundwater layer, is almost exhausted due to its use for artificial irrigation. Cultivated land is already being transformed back into a grassy landscape, where bison breeding is increasingly being practiced. Under the name Buffalo Commons it is proposed to convert large areas back into prairies, relocate people and reopen the areas for wild bison. Hunting and tourism could open up a new economic basis. In addition, the use of the Great Plains is now increasingly focused on generating wind power.

This is countered by a trend of plowing under and intensively using areas in the northern parts of the plains that have not yet been used or that have only been used extensively and have therefore retained the character of grassland. The reasons are the promotion of the cultivation of energy crops and a special form of the state-sponsored crop failure insurance, which enables cultivation on marginal yield locations or even areas, whose cultivation could not be profitable without the insurance.

The Sandhills in Nebraska are among the largest regions of the Great Plains that have not been subject to agricultural use. It is a very large area of ​​contiguous sand dunes that are stabilized by low vegetation. 85 percent of this region therefore still has the original vegetation.

Also known as Mount Rushmore State / Coyote State, South Dakota is short for SD with a population of 754,844. According to Countryaah, the capital city of South Dakota is Pierre and the biggest city is Sioux Falls.