Suriname, Republic of the North of South America. The country borders in the north to the Atlantic, in the east to French Guiana, in the south to Brazil and in the west to Guyana. Suriname is South America’s smallest independent country. Almost all settlements are on the coast. Suriname was Dutch Guiana until it became independent in 1975.

The name Suriname is also the name of a river and may be derived from a former population group, the Surin.

Suriname has three natural geographical regions. The coastal plain to the north is flat with mangrove forests, swamps and sandy beaches. It is widest in the west and narrows to the east, and is intersected by several rivers and canals. Inside is a 50-100 kilometer wide savanna belt with sandy soil. Most of the many rivers are navigable in the lower course. The southern areas are a highland covered by dense forest.

Tropical rainforest covers about 80 percent of Suriname’s area. The highest point is Julianatop, 1280 meters above sea level. Northeast of the country is the large Lake Brokopondo reservoir. About 30 percent of the area is national parks and nature reserves.

The climate is tropical and humid. The warmest month is October (23-33 o C) and the coldest month is February (22-29 o C). There are small seasonal and daily fluctuations. The annual rainfall is 1500-2500 millimeters.

Plant life is rich. There are more than 2000 species of trees, several of which are commercially important.

There are about 150 species of mammals, including howler monkeys, sloths, harvesters, tapirs, jaguars, cougars and ocelot, as well as many bat species. More than 600 bird species are registered. There are many species of turtles and snakes. Insect life is rich. 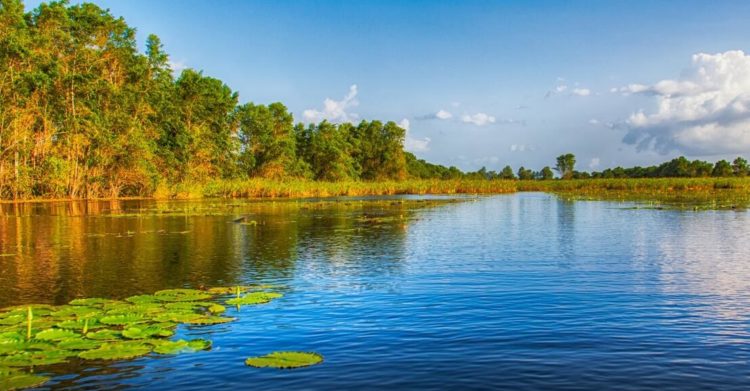 About 90 percent of the population lives in Paramaribo and elsewhere on the coast. About 350,000 Surinamese live in the Netherlands (2005).

More than 20 languages ​​are spoken in Suriname. The official language is Dutch. Many also speak English and Javanese. The Pidgins language is based in English, Dutch and African languages. Another widely used language is Caribbean Hindustani.

Suriname’s defense consists of army, air defense and navy; a coast guard was established in 2013. Military service is voluntary for women and men over 18 years.

Suriname is divided into 10 administrative districts.

The area was sparsely populated by Arawak – and Caribbean Indians when Spanish seafarers discovered the coast in 1498. In 1651, Englishmen from Barbados set up Marshall’s Creek trading station on the Suriname River. Plantation operations with African slaves were established. Jews from Brazil built America’s first synagogue in Suriname in 1665. In 1667, the Netherlands acquired the rights over Surinam against the waiver of the rights over Nieuw Amsterdam ( New York ) to the United Kingdom, and the Dutch Guiana colony was established. Refugee slaves created the maroon culture by rivers in the rainforest.

Control of Suriname was alternately under the Netherlands, Britain and France until the Netherlands regained it in 1815. Slavery ceased in 1863, but the slaves were not fully freed until 1873 and moved to Paramaribo. To replace them, the Dutch introduced contract workers from India, Java and China, and the colony eventually gained a very heterogeneous population and culture.

In 1929 the Dutch Guiana set the boundaries. In 1941, following an agreement with the Dutch government of exile, the United States occupied the colony to protect bauxite mines.

In 1951 Dutch Guiana gained internal autonomy and in 1954 became an equal part of the Kingdom of the Netherlands. The country became an independent republic in 1975.

Due to poor prospects for work and social security in the first years after independence, almost half of the population of Surinam emigrated to the Netherlands.

A group of younger officers did a coup in 1980. In 1982, the president was ousted by Colonel Lieutenant Désiré Boutserse. The executions of 15 oppositionists in December 1982 caused the Netherlands and the United States to suspend all military and economic cooperation with Suriname.

In 1987, the country was given a new constitution and returned to democracy the following year while Bouterse retained control of the army. Civil war between the Surinamese army and Maroons loyal to rebel leader Ronnie Brujnswijk broke out in 1986 and weakened Bouterses’ position in the 1990s. In 1999, Bouterse was convicted in absentia for cocaine smuggling. In 2010, Bouterse returned to power when he was elected president.

Agriculture is substantially operated in coastal areas; Growing rice is most important. Other products include bananas, citrus fruits, corn, coconuts, sugar cane and vegetables. Livestock such as cattle, pigs, goats and poultry are kept.

Most of the logs are processed.

There is considerable sea and river fishing. Most important is shrimp fishing.

The economy is dominated by mining; most important is the extraction of bauxite. It also recovered gold, iron ore, manganese, copper and oil. There are large deposits of platinum and kaolin. Bauxite, oil and gold make up about 85 percent of export revenue.

The industry has an emphasis on food and beverages, clothing and sawmills.

It is compulsory and free primary school for children aged 6-12 years. High school is two-fold and includes 4 + 3 years. There is one university in Paramaribo.

There are 2 daily newspapers in Dutch and an online newspaper in English.

Suriname has an Indo-Caribbean music tradition and is known for Kaseko, a fusion of folk from Europe, Africa and North and South America.

Many Dutch footballers are of Surinamese origin.