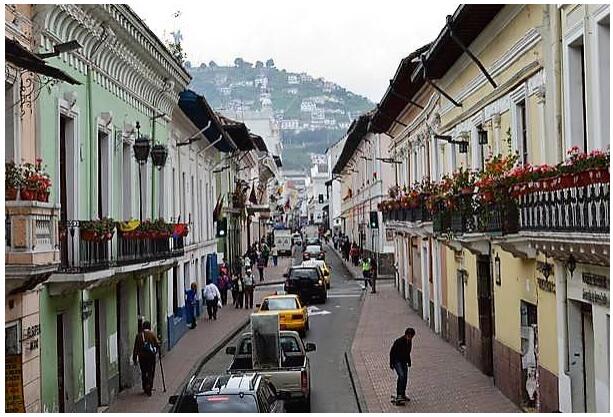 Due to the corona pandemic, which is still severely affecting Ecuador, ” entry is currently only possible by air for people who do not have a permanent residence in Ecuador. The land borders are closed except for the return of residents. Entry must A negative PCR test that is less than 10 days old must be presented, otherwise a 10-day quarantine in a hotel provided by the government is required. A quarantine at home is only possible for Ecuadorians and foreigners from certain risk groups living permanently in Ecuador. ”

In general: For tourist stays in Ecuador (up to 90 days), EU nationals do not need to obtain a visa before starting their trip. However, the passport must still be valid for six months. There is the possibility on site to apply for an extension of the tourist visa by up to 30 days at the Ministry of Foreign Affairs before the 90-day period has expired, upon presentation of the valid passport. The entry stamp is mandatory (even when entering via the land border of Peru or Colombia). Substantial fines (at least US $ 200) must be expected in the event of violation of the Ecuadorian right of residence. The passport or a (certified) copy of the passport should always be carried with you. For stays of over 90 days Different regulations apply depending on the purpose and length of stay. Attention should be paid to adequate health insurance coverage, which also covers any home transport. All medical treatments in Ecuador must be paid for privately immediately.

Travel in the country

Most roads are mostly passable all year round and petrol is still much cheaper than in Europe. However, one should take into account that the signage is rather poor. In addition, road traffic is increasing rapidly. There are currently almost 2,500 buses, around 14,000 taxis and around half a million cars in the urban area of Quito. This is around 10% more than in 2014. In the past, compliance with traffic regulations was relatively lax. For some years now, the state has begun to impose heavy fines on road traffic offenses to be punished. For example, if you exceed your speed limit, you risk three days in jail. Potholes and landslides often cause problems. An international driver’s license, passport and credit card are required to rent a car.

The bus is the most important and cheapest means of transport in Ecuador. In addition, all cities are connected to each other, so you can easily reach all major tourist destinations. The prices for overland trips are very cheap.

As a country located in northwestern part of South America according to extrareference, Ecuador is connected to the international flight network via the two international airports Quito and Guayaquil. In February 2013 the new airport opened in Quito, which bears the same name as the old one (Aeropuerto Internacional Mariscal Sucre). This means that Ecuador now has one of the most modern and safest airports in Latin America – which could not be said of the old airport. The transport connection to Quito is still in the making and the drive to the city center, 18 km away, can take up to two hours depending on the traffic situation. In addition, Cuenca, Loja, Manta, Lago Agrio(Oriente), the Galapagos Islands and several other cities in domestic air traffic. The youngest airport opened a few years ago in the coastal town of Salinas, one of the most popular seaside resorts. Tame initially flew from Quito several times a week and later on weekends, but ceased operations in November 2018. Domestic flights are still relatively inexpensive and are best booked directly at local airports, in the city offices of airlines, travel agencies or, easiest, online. The three airlines operating in Ecuador so far were TAME, Latam and Aerogal, which was taken over by the Colombian Avianca. However, in May 2020 the government decided Liquidate TAME. The corona crisis, which led to the cessation of flight operations, was named as the official trigger. But even before that, TAME was a deficit company; The equivalent of 365 million euros are now said to have accumulated in losses. Even if the domestic flight tariffs of the airlines usually do not differ much from each other at the moment, it is never wrong to compare flight prices online – especially on the “race track” Quito-Guayaquil. In September 2020 it was announced that a new airline under the name Ecuatoriana Airlines(under the name Ecuatoriana de Aviación it already existed from 1957 to 2006) and is to take over the domestic routes formerly operated by TAME. The cities of Coca, Cuenca, Esmeraldas, Guayaquil, Loja, Macas, Manta, Quito, Santa Rosa and Tulcan are to be approached.

Until the outbreak of the corona pandemic, the Tren Crucero (Quito-Guayaquil-Quito) offered a trip through the highlands of Ecuador to the coastal region and vice versa in 4 days and 4 nights. The sections could also be driven individually. Two other routes are the spectacular zigzag ride (Alausí-Sibambe) over the famous ” devil’s nose “”, which begins south of the city of Riobamba in central Ecuador, as well as the coastal route Ibarra-Salinas and back. In recent years, the restoration of the rail network and the restoration of rail traffic for tourism purposes has been promoted as a political priority and a symbol of national unity. However, the economic crisis in the wake of Covid-19 has called into question the continued existence of the railroad. Rail transport has been suspended for the time being. The Ecuadorian railroad is currently looking for investors. In March 2020 the government announced the liquidation of several state-owned companies, including also Ferrocarriles del Ecuador.