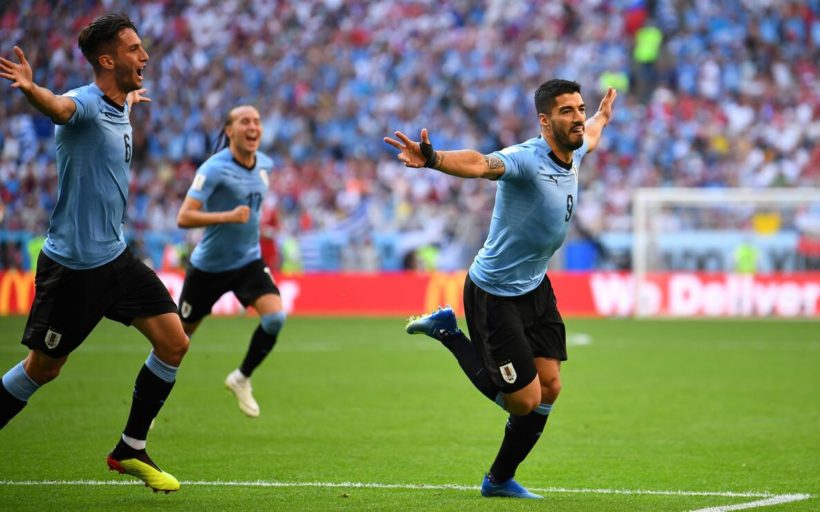 Uruguay is a republic in southeastern South America. The country is like a cone bordering Brazil in the north and east, Argentina in the west and the Atlantic in the south and southeast. Uruguay is South America’s second smallest country and is an economically well-developed democracy. More than half of the inhabitants live in the capital Montevideo.

The country consists mainly of a low-lying steppe. Along the border with Brazil there are hills; from here, two ridges extend through the country in a northeast-southwest direction (Cuchilla Grande with Uruguay’s highest peak Cerro Catedral, 514 meters above sea level) and Cochilla del Haedo.

To the west, the terrain from Cuchilla Grande is lowered towards Río Negro, which flows through the plain and opens into Río Uruguay which forms the border with Argentina. Along the lower course of the Río de la Plata there is a coastal plain with sandbanks and sandy beaches. Farther east to Brazil there are lagoons and swamp areas. In the northwestern regions there are steep slopes of volcanic rocks. 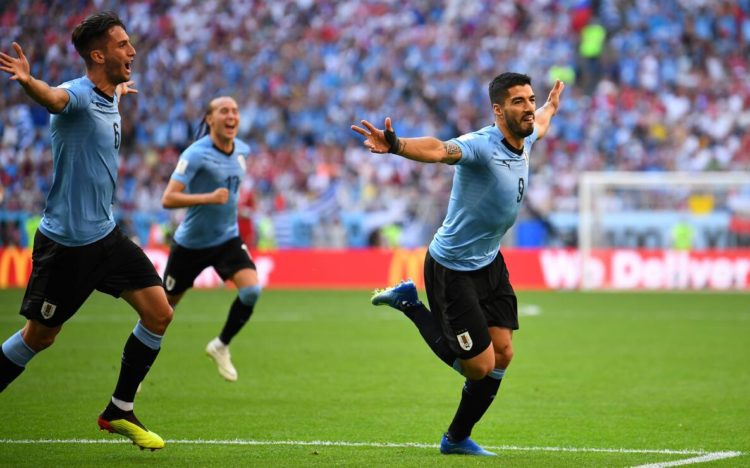 Despite its small size, Uruguay is a historic footballing power. The country won the Soccer World Cup at home in 1930, and Brazil in 1950. Here, Uruguay’s biggest star in recent years, Luis Suárez, celebrates the country’s first World Cup goal in 2018 against Russia, a match Uruguay won 3-0.

The climate is relatively humid and subtropical with rainfall throughout the year. The average temperature in the coldest month (July) is 10-12 o C, in the warmest month (January) 22-24 o C. Annual average rainfall usually exceeds 1000 millimeters. Occasionally, cold air from the southwest (pamperos ) can cause severe temperature drops, storms and thunderstorms.

There are 85 species of mammals, including some monkeys, skunks and reptiles. Of the approximately 400 bird species, hummingbirds, parakeets and herons and ibises can be mentioned in the wetlands. There are 70 reptile species, including caimans, and 40 amphibian species.

Uruguay is a republic with a president as head of state and prime minister. Together with the government, the president, who is elected in the general and direct elections for five years, has the supreme executive power. It has been mandatory since 1934 to vote in elections in Uruguay, with the exception of those who are abroad or sick and therefore prevented from attending the polling station.

Congress has a 99-member House of Representatives and a 31-member Senate (30 elected for five years and the Vice President as president of the Senate).

Uruguay is divided into 19 ministries (counties).

The defense consists of army, air defense and navy. Military service is voluntary for women and men.

According to the latest official census, 90 percent define themselves as white, six percent as blacks, 3 percent as “Native Americans”, 0.4 percent as Asians, while the rest have not answered this question (INE, 2011). 95.2 percent of the population lives in urban areas (2014).

Uruguay has no official religion. 46 percent are Roman Catholics, nine percent are non-Catholic Christians, 30 percent believe in God but are without religion, 14 percent are atheists or agnostics, 0.6 percent are animists and 0.4 percent have Jewish faith. 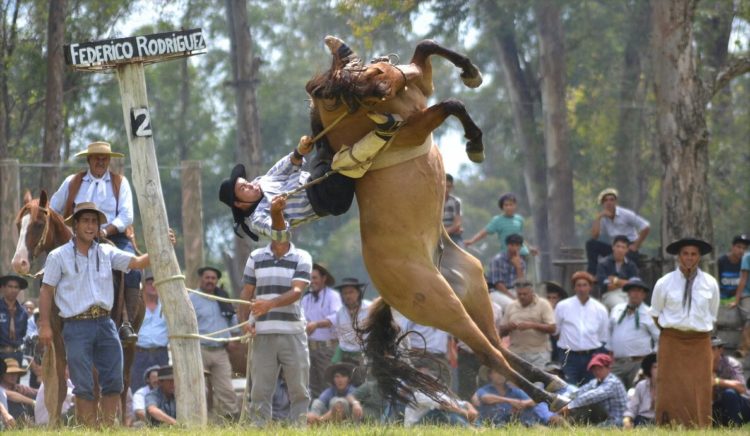 The culture of the gaucho, Uruguay’s and Argentina’s responses to the US cowboys, is strong in Uruguay. Riders meet in competition to do the most heartbreaking stunts on horseback.

Before the Spaniards arrived in 1516, the present Uruguay was sparsely populated by nomadic charrua people, and by Guarani. Portuguese from Brazil created Colonia del Sacramento at Río de la Plata in 1680. When the Spanish founded Montevideo in 1726, they expelled the Portuguese from their colony. In 1776, Uruguay became part of the Viceroy of Río de la Plata. Almost all of Uruguay’s original population was exterminated during the Spanish colonization.

Uruguay became involved in the independence wars in the Spanish-American colonies in 1811. Armed rebellion was overthrown by Argentine forces in 1816, and the country was occupied by Brazil from 1817 to 1828, before disintegrating with Argentine aid and becoming an independent republic in 1828 From 1839 to 1851, there was a civil war between the major landowners and the bourgeoisie who organized themselves in the parties Blanco (the whites) and Colorado (the red). From 1865 to 1870, Uruguay was allied with Brazil and Argentina in the Triple Alliance war against Paraguay. A bloody conflict between Blancos and Colorados was settled by reconciliation in 1904.

A long period of political, social and economic development was initiated by the reformer José Battle y Ordóñez and marked the time leading up to his death in 1929. During World War II, Uruguay was neutral and the country was given a new constitution in 1951. The presidential office was replaced from 1952 to 1966 by a council of nine. Rapidly falling export revenues and high inflation led to political turmoil and the rise of extremist groups, including the left-wing city bar Tupamaros.

In 1966, a strong presidential power was reinstated. Power was transferred to the military by a coup in 1973 and a brutal persecution of regiment opponents was initiated. The 1980s were characterized by large devaluations and large foreign debt.

In 1984, the transition to democracy was initiated. After the establishment of a civilian government the following year, many political prisoners were released and full political and civil rights restored. Economic reforms were implemented and foreign trade and capital stabilized the economy.

Two parties, Partido Nacional (center-right) and Partido Colorado (right), swapped for a long time in the presidential office. In the 2004 presidential election, for the first time, the left won the Uruguay election. Tabaré Vázquez from the coalition Frente Amplio was the country’s president from 2005 to 2010.

Nearly three-quarters of the area is grazing land. The dominant sector in agriculture is livestock and sheep farming. The country produces many dairy and meat products.

In 2017, Uruguay exported goods in excess of $ 7.8 billion, most of which consisted of meat and agricultural products (INE, 2017). Imports in 2017 totaled $ 8.5 billion. Most electrical appliances, products from the chemical industry, mineral products, fuel and other products extracted from oil were imported (INE, 2017).

In recent years, arable farming has become increasingly important. On the Uruguay River and on the coastal plains in the south, grain, maize, rice, flax seeds, grapes for wine production, tobacco and citrus fruits are grown.

Most of the logs are spent on fuel, timber and wood pulp.

Mineral production is of limited importance since the quantities are often too small to be profitable. In the north, iron ore, lead and copper are extracted in the south, including granite, limestone and marble. Electricity generated by the large dam plant Embalie del Río Negro has reduced the need for oil imports.

There are textile, clothing, metal and cement industries as well as chemical and oil refining. Most of the industry is in and around Montevideo.

Tourism is significant and increasing. At beautiful beaches from Montevideo and eastwards, bathing resorts and hotels have been developed. Punta del Este is the main tourist destination. 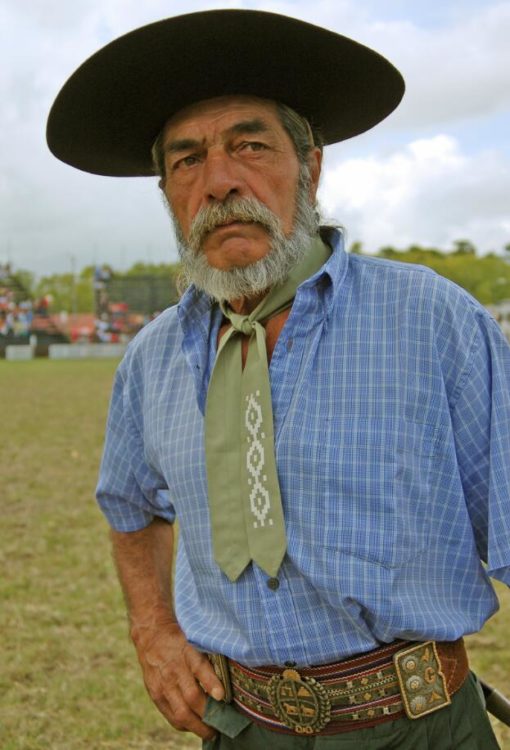 The education system in Uruguay is divided into 4, of which 11 years are compulsory. From the age of 4, all children must attend daycare. From age 6 to age 12, they have to attend primary school. Then it is compulsory to attend three years of secondary school. The three years of high school are not compulsory. All education, even at the public universities, is free. The country has six universities. Uruguay has the lowest rate of illiteracy in Latin America. At the last official census in 2011, everyone over 10 years was asked “can you read and write”. 96 percent answered yes, while 1.4 percent answered no (INE, 2011).

There are 16 daily newspapers and a large number of weekly newspapers. There are more than 100 radio channels and more than 20 TV channels, five of which are nationwide. With certain restrictions, freedom of expression is guaranteed by the Constitution.

Folk and popular music are characterized by gaucho roots common with Argentina; this also applies to tango. The folk dance candombe has African origins and is performed, among other things, during carnival. There are a number of popular rock bands. Jorge Drexler (1964-) is an internationally famous musician and actor.

Football has strong historical roots in the country and is the most popular sport. Uruguay became world champion in soccer at home in 1930 and in Brazil in 1950.