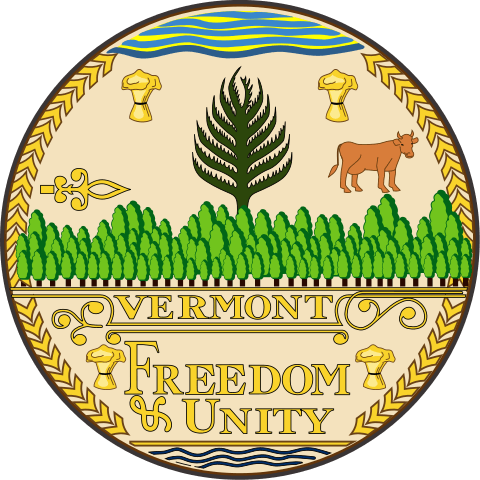 Vermont is a state of the United States of America and part of New England. It is best known for its maple syrup, the mining and processing of marble and the idyllic mountain landscapes. The Green Mountains and Lake Champlain are popular recreational areas. Logically, the nickname is also Green Mountain State. Many wealthy people in the surrounding states own a weekend home here.

In autumn, the changing color of autumn leaves characterizes the landscape (“ Indian Summer ”). In 2013, around 12.8 million tourists came to Vermont. The mountains, rivers and lakes are ideal for recreational activities ranging from skiing in winter to fishing (fly fishing), hiking, trekking, water hiking and camping in summer and autumn. The quiet towns and villages of Vermont are also part of the visitor’s program.

Vermont was part of the New York colony during the colonial days of North America. Vermont was originally the home of the Indian tribes of the Iroquois, Algonquin, and Abenaki. In 1609, the French explorer Samuel de Champlain declared the area around today’s Lake Champlain in view of the surrounding mountains as ” Les Verts Monts ” (Green Mountains), which was later anglicized to the current name.

Abbreviated as VT by AbbreviationFinder, Vermont is bordered to the north by Canada (15 border crossings), to the west by New York (state), to the south by Massachusetts and to the east by New Hampshire, where the Connecticut River forms the border. 77 percent of the state is covered by deciduous forests, especially maples.

The Lake Champlain is the largest lake of Vermont and the eighth largest inland waters of the United States. It is about 180 kilometers long, 19 kilometers wide and forms about 50 percent of Vermont’s western border. The fertile Champlain Valley lies on the edge of the lake. The Green Mountains are a heavily forested low mountain range; its north-south axis runs almost the entire length of Vermont. The Taconic Mountains are in southwest Vermont.

Many of the forests have been cleared to gain arable land. By 1850 almost 70 percent of the once large stocks had been cleared. In the decades that followed, many of Vermont’s farmers moved to the Wild West or industrial towns on the east coast. Many of the farms gradually fell into disrepair and the areas became forest again. The populations of previously almost extinct species (brown bear, elk, coyote and wild turkey) increased again.

The religious communities with the largest number of members in 2010 were the Catholic Church with 128,293, the Protestant United Church of Christ with 16,392 and the United Methodist Church with 14,710.

The current flag of the US state of Vermont was introduced in 1923.

It shows the state seal on a blue background. The blue color is based on an earlier vigilante flag.

Also known as Green Mountain State, Vermont is short for VT with a population of 608,827. According to Countryaah, the capital city of Vermont is Montpelier and the biggest city is Burlington.