Guyana, Republic of Northeastern America. The country has a coast to the Atlantic Ocean in the north and borders Suriname in the east, Brazil in the south and southwest and Venezuela in the northwest. Guyana was a British colony from 1814 and became independent in 1966. Three-quarters of the country is covered by rainforest. 90 percent of the population lives on the coast.

National anthem is ‘Dear Land of Guyana, of Rivers and Plains’ (‘Dear Guyana country, of rivers and plains’.)

The name Guyana comes from Guiana, an Amerindian word meaning ‘Land of the Waters’.

It is a 15-60 kilometer wide marshy plain on the coast. This is partially below sea level and is protected by a system of dikes and drainage channels. Both a sand belt within and a large upland area are covered by dense rainforest. In the southwest there is dry savanna. The Inner Highlands are a sloping plateau with Mount Roraima, 2810 meters above sea level, as the highest point in the country.

From the plateau large rivers flow to the coast; the four largest are Essequibo, Demerara, Courantyne and Berbice. Kaieteur Falls has one of the world’s longest single falls, 226 meters. There are several large islands in Essequibo’s mouth.

Guyana is located in the tropical rainforest belt. Temperatures are high throughout the year and the seasonal variation is small. Georgetown has an average temperature of 27 o C in October and 26 0 C in February. On the coast there are two rainy seasons (April-August and November-January), inland there is one rainy season (April-September). Georgetown has about 2400 millimeters of rainfall a year; inland, the rainfall is somewhat less.

Mangroves and grasses characterize the coast and inside are wetlands with grass and palm species. The botanically rich tropical rainforest covers about three quarters of the area and has many economically important tree species. The hinterland is also characterized by savanna and grasslands.

There are social tensions due to ethnic contradictions and major differences between poor and rich. 35 percent of the population lives below the poverty line (2006).

Guyana’s emigration is among the highest in the world; more than 55 percent of citizens live abroad.

90 percent of the population lives on the coast. The capital, Georgetown, is the only major city.

The defense consists of the army. Guyana Defense Force Army, which also includes an air defense and a coast guard. Military service is voluntary for women and men over the age of 18. A semi-military militia constitutes a reserve force.

The country is covered in 10 regions.

Guyana is a member of the UN and most of the UN’s special organizations, the World Health Organization, the Commonwealth, the OAS (the Organization of American States ), the CARICOM and the Lomé Convention. UN stands for United Nations. See abbreviationfinder website for all abbreviations related to Guyana.

Amerindians populated Guyana before Europeans arrived. Kristoffer Columbus saw the coast of Guyana in 1498. The Dutch were the first to establish colonies; the first in Essequibo in 1616. The colonists first and foremost cultivated sugarcane on plantations with African labor. In 1667, the British recognized Dutch supremacy over Guyana and Surinam, but occupied the area in 1796. The colonies Berbice, Demerara and Essequibo which the British bought in 1814 and merged into the British Guiana colony in 1831. Slavery was abolished in 1834. 1840s workers from India, China and Southeast Asia. 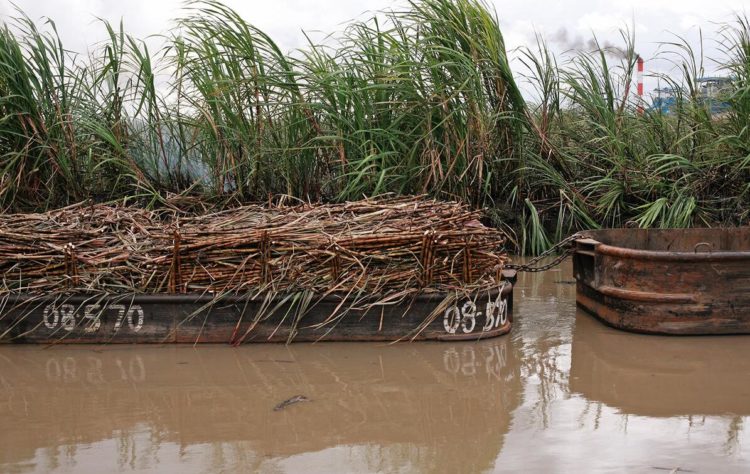 Sugarcane from Guyana. Sugar cane is the most important export product for Guyana.

British Guiana became the crown colony in 1828 and gained internal autonomy in 1953. Political parties emerged in the 1950s with the PPP (People’s Progressive Party) mainly supported by the Asian-section of the population and the PNC (People’s National Congress Party) supported by the African-dominated population.

The PNC formed a coalition government and led the country to independence in 1966. In 1970, Guyana became a Republic within the Commonwealth. In 1987, the country was declared a cooperative republic with a Marxist-Leninist profile; at the same time there was a lot of corruption and smuggling.

Guyana gained international attention when more than 900 members of the American cult of the People’s Temple died (partly murdered and partly by collective suicide) in “Jonestown” in 1978, see the Jonestown Massacre.

After the PNC had ruled Guyana since independence, PPP at Cheddi Jagan came to power in the 1992 elections. Jagan died in 1997 and an extraordinary election was won by US-born widow Janet Chagan. She became the first female president of Guyana and South America and retired in 1999.

Guyana is heavily financially dependent on US support and is one of the poorest countries in South America.

Sugar cane is the main export product; second most important is rice. Coffee, cocoa, coconuts and citrus fruits are also grown. There are some cattle herds especially on the savannas in the south of the country; other livestock are sheep, pigs and chickens. The large forest resources are underutilized. Fisheries include catching shrimp.

Of minerals, bauxite, gold and diamonds are the most important. In addition to mining, the industry relies on the processing of raw materials, including rum, refined sugar, molasses, canned fruit, shrimp and rice. Another industry is the production of textiles and clothing for the domestic market.

The main export goods are bauxite, gold, rice and sugar. Agriculture accounts for 20.3 per cent, industry 39.2 per cent and service industries 40.5 per cent of GDP (2014).

There is a 10-year compulsory school for children aged 5-15. The elementary school is 6 years old and the secondary school 5 years old. There is one university and a number of higher education institutions.

There are 6 daily newspapers and 4 weekly newspapers in Guyana, and there are 3 television stations and 7 radio stations.

The most popular sports are cricket, softball (beach cricket) and football.