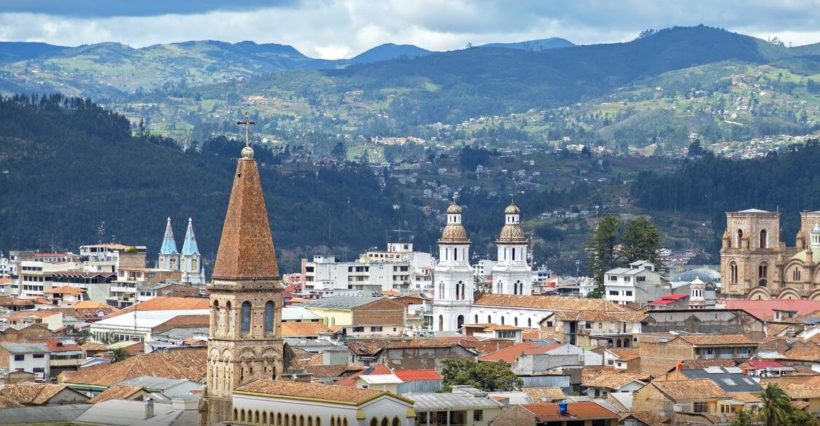 Ecuador is a republic in northwestern South America, at the equator. It borders Colombia in the north, Peru in the south and east, and the Pacific in the west. The Galápagos Islands in the Pacific about 1,000 kilometers from the mainland are also part of Ecuador.

The Andes range from north to south across two parallel mountain ranges. To the east of the Andes there are large areas of tropical primeval forest that make up parts of the Amazon area, and west of the high mountains lies the country’s coastal zone.

Ecuador was created as a separate state in 1830 following the dissolution of Greater Colombia, which besides Ecuador consisted of today’s Colombia, Venezuela and Panama. The name Ecuador was chosen based on the country’s geographical location along the equator. When the Spaniards began conquering the area in 1531, it was part of the Incaret. Traces of human activity can be found as far back as 8,000–11,000 years before our time.

In the Ecuadorian Constitution, Ecuador is described as a multicultural and multinational state, and the population consists of different ethnicities and several indigenous minorities. The most important trade routes are agriculture and oil recovery. President since May 24, 2017 is Lenín Moreno. Ecuador’s mainland is naturally divided into three parts. The coast and the lowlands in the west (La Costa), the highlands located in the Andes mountain range (La Sierra) and the lower lying area in the east which also includes Ecuador’s part of the Amazon rainforest (El Oriente). The Galápagos Islands form a fourth geographical area.

These different regions offer significant differences in climate and the environment. The Amazon is known for having the largest species diversity in the world, and in the tropical rainforest areas of Ecuador there are significant oil and mineral deposits in the underground. The diversity of species and the natural environment that is also home to several indigenous people is today threatened by oil production and mining.

The highlands consist of mountain ranges with some of the world’s highest mountain peaks and between these valleys with a very favorable climate for agriculture and cattle farming. Today, the wide valleys are characterized by industrial and partly export-oriented agriculture. Small farmers stand for the cultivation of the valley sides up to the high mountain, and they use advanced traditional irrigation systems. The highest altitude areas in the Andes are called paramo. The paramo is used as a pasture for livestock, and these are also vital catchment and collection areas for rain and melt water from the glaciers. 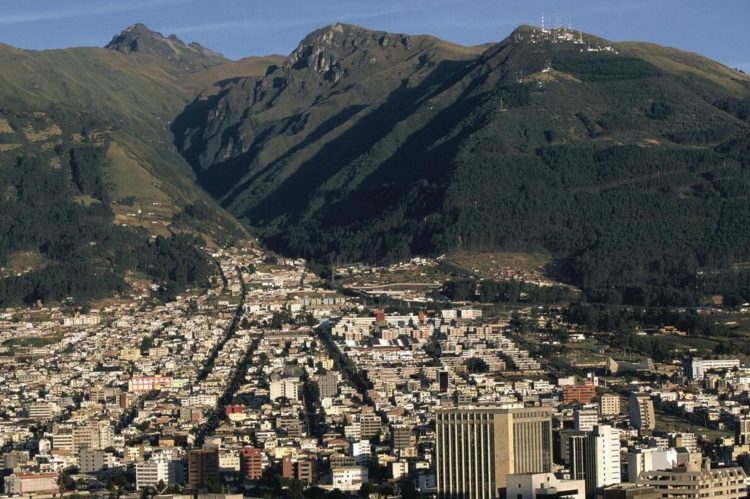 In the transitions between the highlands and the rainforest to the east and the highlands and the coast to the west, in the so-called montaña areas, the many differences in altitude form a wide range of microclimates. These give rise to a particularly large species diversity. The height differences in the montaña areas also form the basis for waterfalls and waterfalls, which are increasingly being extracted for hydropower. The coastal areas of Ecuador are characterized by intensive fruit cultivation on large plantations, and aquaculture in the coastal zone. Shrimp farming in particular is currently eradicating important areas of mangrove forest. In the northern coastal areas, there is a dramatic deforestation as a result of illegal timber operations.

The Galápagos Islands are distinguished by their unique plant and animal life which has arisen as a result of the islands’ total isolation from the mainland. The country’s authorities regulate tourism to the islands, which is so extensive today that it threatens several vulnerable and unique ecosystems.

According to Countryaah.com, one third of Ecuador’s more than 17 million residents live in the two largest cities, Guayaquil and Quito. There is a continuing tendency for rural people to move to urban areas. In addition to the steady influx of people to the two largest cities, the northern coastal areas are the most rapidly urbanized. Ethnicity in Ecuador is based on self-attributed identity. During the last census in 2010, the Norwegian Institute of Statistics and Census (INEC) opened the public’s choice of affiliation. The majority, more than 70 percent, defined themselves as mastics, while the rest of the population identified themselves as Native Americans, Afro-Ecuadorians, Montubios and Whites, respectively.

There are major economic differences in the country, but income disparities have leveled off over the last ten years. In 2017, the Gini coefficient was about 0.45. A 2010 study suggests that 20 percent of wealthiest households control 70 percent of Ecuador’s material and financial values. According to the World Bank, around 23 percent of the population was poor in 2017, meaning they lived below $ 5.5 a day. Under the governments of President Rafael Correa in the period 2007–2017, poverty reduction was a priority for national policy, together with a large-scale effort to improve public education and health care. During this period, income differences decreased significantly (from a Gini coefficient of 0.53 in 2007 to 0.45 in 2017).

The indigenous movement in Ecuador has played an important role in Ecuadorian society and politics since the early 1990s. As a key civil society player with the national organization CONAIE at the forefront, they have exerted pressure on the country’s authorities and influenced national policy-making. The instruments range from various forms of civil disobedience, political organization work and to strategic alliance building with political parties. The most important fighting cases have been the preservation of language and cultural character, rights to land, water and forests and resistance to environmental degradation of natural resources; especially in the Amazon rainforest. Indigenous organizations and leaders played an important role in the work of drafting a new constitution in 2008. One of the principles that was established by the constitution was that nature has its own rights.

The dominant religion is Catholic Christianity. The Catholic Church has a strong position in the country, but the state and church have been separated since the early 1900s. There is a growing support for evangelical Christianity.

Spanish is the official language. In addition, there are a number of languages ​​spoken by indigenous peoples, with quechua (the dialect form kichwa in Ecuador) being the most widely used.

Ecuador is a democratic unity republic where the president is supreme head of state. General voting rights for all citizens over the age of 18 were first introduced in 1979. The country’s governing body consists of an executive, a legislative and a judiciary, as well as a national council that oversees elections, and a national control body for public business and corruption.

Ecuador’s governance has been characterized by instability for large periods. Since independence in 1830, the country has had 20 constitutional laws, the last of which was introduced in 2008. Regime and presidential changes have been frequent, but in the period 2007–2017 the country was ruled by one president, Rafael Correa. This is the longest consecutive period a president has been in power in Ecuador.

Ecuador is a member of the UN and most of the UN’s special organizations, including the World Bank ; by the Organization of American States and the Latin American Trade Organization ALADI. With the exception of the period 1992-2007, Ecuador has been a member of OPEC since 1973.

Ecuador’s gross domestic product (GDP) per capita was $ 11,410 in 2018. According to the World Bank’s ranking, it can be classified as a middle-income country. The national currency is the US dollar.

Oil recovery has been Ecuador’s economic backbone since 1972, and oil is the country’s most important export product. Exports mainly consist of crude oil. Own production of further developed oil products such as gasoline, diesel and natural gas is not sufficient to cover the country’s own consumption. Ecuador supplies about 0.5 percent of the world’s total oil consumption annually.

Ecuador is also a major exporter of food; especially shrimp, bananas, processed fish products and cocoa, and in addition flowers. Extraction of minerals is still a small part of total exports, but is growing rapidly. Other industrial activities in the country mainly target a national market, especially textile manufacturing and processed foods.

Ecuador’s main trading partner is the United States, albeit to a decreasing degree. In recent years, the Ecuadorian government has signed several important South-South cooperation agreements. Chinese companies have made heavy investments in the oil, mineral and energy sectors. Russian companies are also investing in the energy sector, and especially in hydropower development. Ecuador has a significant debt to China that will be repaid in the form of oil supplies. 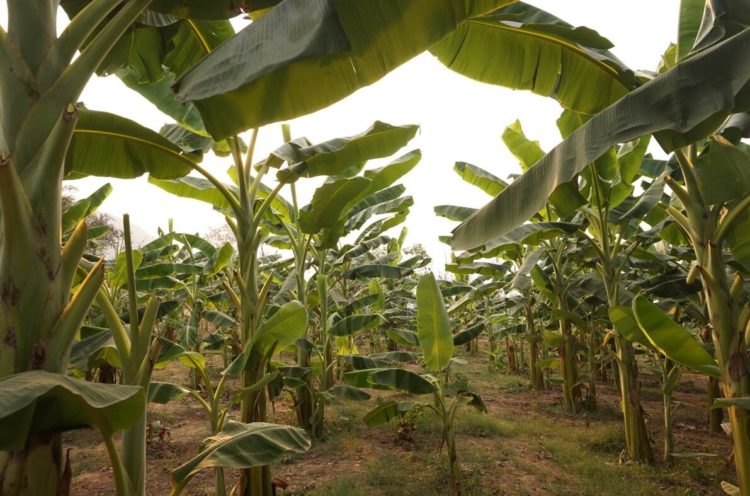 The land area that is now Ecuador, in the 1400s, constituted the northernmost and most recently included part of the ancient Incarctic. The area was on the outskirts of the Inca empire, and consisted of agricultural communities linked by extensive barter trade and the exchange of products between ecological niches at different elevation levels of the landscape, from the high plains (páramos) and down to tropical rainforests in low-lying regions. The Spanish conquistadors, conquistadores, led by Francisco Pizarro took possession of these territories in the period 1531–1533, and the Spanish crown incorporated them into the Viceroy of Peru.

As part of the introduction of Catholicism, the Spaniards launched a large-scale campaign to destroy the religious symbols and places of the indigenous peoples. New cities were created and the rural population was gathered in their own communities. Society was divided into two separate “republics”; the cities, populated by Spanish descendants and Creoles, and the surrounding agricultural areas, inhabited by the indigenous peoples and administered by a new land-owning elite – the hacienda owners.

The new colonial mercantilist economy had two main pillars, agriculture and textile production, and was based on forced labor and other forms of exploitation of local labor. As a result of the changes brought about by the colonization of the northern Andes, the kichwa developed into a common language for descendants of the indigenous peoples.

Ecuador became an independent republic in 1830. In this and the following century, the country was ruled by two rival political tendencies; a conservative and a liberal, who are shifting to having power. In the second half of the 19th century, a conservative government sought to establish a Catholic nation in Ecuador. In the early 1900s, however, the country underwent extensive secularisation, including the church being separated from the state.

The 20th century was marked by long periods of political turmoil and instability and shorter periods of political consolidation and state-building. In the second half of the century, Ecuador was subject to military dictatorships for two periods (1963–1966 and 1972–1978). The country also underwent two land reforms. The latter, in the early 1970s, led to an extensive redistribution of land and a gradual eradication of the economic dominance of the land-owning elite. From the 1950s there has also been a large influx of people from the country to the big cities.

The relationship with the indigenous population changed slowly throughout this century. The life property was formally abolished in 1918, but universal suffrage was only introduced in 1978. In the wake of the second land reform, a strong indigenous movement also grew, which has been a key driver of social and political change since the 1990s. In the late 1990s, Ecuador also went through a severe economic crisis that triggered the most extensive wave of emigration in the country’s history, especially to the United States and Spain. The beginning of the 21st century was also marked by political instability where several presidents were deposed before the end of their reign. This trend has temporarily stopped the election of Rafael Correa to the president in 2006. He remained in power until he was replaced by his party colleague Lenín Moreno in May 2017.