The portal figure in Nicaragua’s literature is the poet Rubén Darío, the founder of Spanish American modernism. Nicaragua has remained the foremost poetry land in Central America during the 20th century. A break with the influence of Darío occurred in the mid-1920’s with José Coronel Urtecho and Joaquín Pasos, characterized by avant-garde language, deep Catholic conviction and the pursuit of popular anchoring. The formation of the Taller de San Lucas group, with mainly Coronel Urtecho and Pablo Antonio Cuadra, a central figure in Nicaragua’s poetry, meant a shift towards a socially critical poem. This tendency was reinforced by the revolutionary priest Ernesto Cardenal and his generational comrades Ernesto Mejía Sánchez, Carlos Martínez Rivas and Ernesto Gutiérrez. 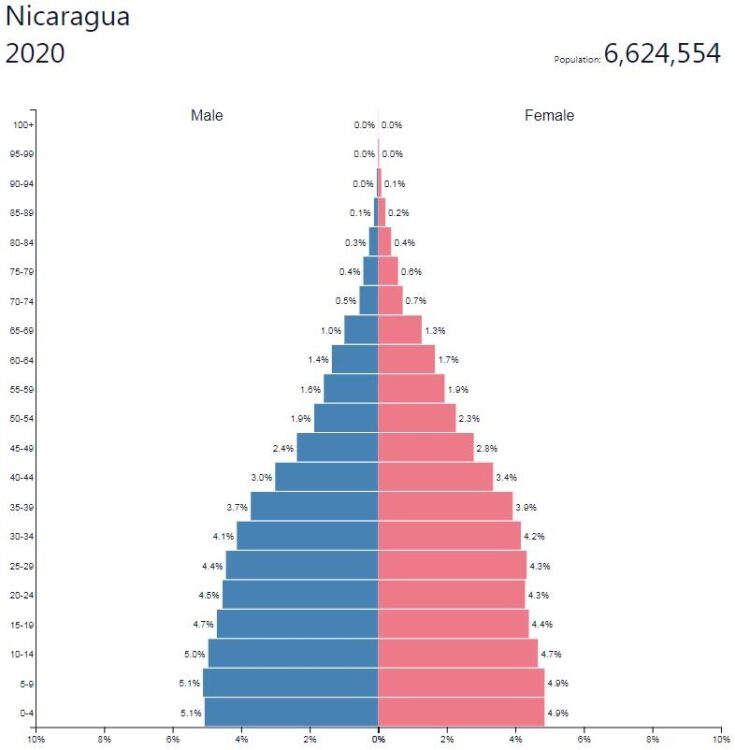 The prose has been less significant in Nicaragua. However, some contemporary novelists deserve mention: Fernando Silva, Lisandro Chávez Alfaro, Sergio Ramírez (Vice President of the Sandini Government) and Pedro Joaquín Chamorro, Violeta de Chamorro’s husband, who was murdered by the Somoz dictatorship.

The theater in Nicaragua has often had a social orientation and a popular foundation. Several of the foremost poets (see Literature above) have also been leading dramatists, especially Cuadra, Pasos and Coronel Urtecho. In the 1950’s, the theater in Nicaragua was revitalized by the English actor Peter Cook, who founded the Teatro Experimental and encouraged new playwrights, including Rolando Steiner, known for his marriage dramas and plays on human contactlessness.

It was a long time before a film production got underway in Nicaragua. President Somoza founded 1970 Producine, a company that started producing Somozo-friendly journal films, military educational films and commercials for Somoza’s own products. However, it was only during the Sandinist regime that an active state support for the film came about, with the founding in 1979 of a film institute, the Instituto Nacional de Cine Nicaraguense (INCINE) as a first step. This, with Cuban help, began to produce a kind of propagandist mini-documentary about the social changes taking place in the country. In the absence of their own laboratory resources, the films were sent to Cuba, and when they returned for screening, they were often out of date.

In the mid-1980’s, therefore, the production of longer documentaries, centered on individual issues such as agricultural reform or the literacy program, switched over. They also started making feature films, short films of e.g. Ramiro Lacayo Deshón (born 1952) and the first feature film, “Alsino y el Cóndor” (1983) by exile chilean Miguel Littin. This was followed in 1988 by i.a. “Espectro de la guerra” by Deshón and 1990 by “Sandino” by Littin. They also collaborated with foreign filmmakers who made films about contemporary or historical events in the country. The most famous are the revolutionary portrayal “Under Fire” (1983) by American Roger Spottiswood and the historical portrayal “Walker” (1987) by British director Alex Cox.

As a result of Violetta Chamorro’s inclusion as president in 1990, INCINE and its cinema chain were abolished with mobile viewing units, national film archives and distribution companies for import and export of film. Subsequently, Nicaraguan film has mostly consisted of short and documentary films that deal with the country’s long experience of war and disintegration.

Nicaragua’s art is characterized by the Baroque during colonial times and by neoclassicalism after independence. In the 20th century, Rodrigo Penalba was one of Nicaragua’s first modern artists. The mural was developed by César Caracas and Leoncio Saenz. Young artists founded the group Praxis in the early 1960’s. At the same time, a group of naive artists, including June Beer, Manuel García and José Arana as well as poet and priest Ernesto Cardenal, active on the island of Solentiname. Armando Morales, who worked for a few years in the United States, became Nicaragua’s most recognized artist. Nicaraguan artists include Alejandro Canales, Leonel Cerrato, Carlos Montenegro and Orlando Sobalvarro. After the Sandinist Revolution (1979), interest in the mural was revived.

Around the turn of the century, the city theater (1903) was built in León with baroque features. Several public buildings around the Plaza de la República in Managua, which became Nicaragua’s capital in 1857, were erected in neoclassical style: the City Hall (1927), the National Palace (archives, libraries, museums, etc.) and the cathedral, both from the 1930’s.

In the 1950’s and 1960’s, the influence of modern styles was evident in the central bank, the Hotel Intercontinental and the national theater, both in Managua.

In art music, composer Luis Delgadillo (1887–1961) emerges as the foremost nationalist, with works such as “Sinfonía Nicaragüense” and the opera “Mavaltayán”.

Traditional music has roots in Mayan and quiche traditions, usually mixed with European and African features. Typical instruments are the flute zul, the skull chirimía, the marimban and the Spanish stringed instruments, mainly the guitar. Common rhythms are mazurka, drum and son nicaragüense, akin to similar Central American styles of Spanish origin.

In connection with the revolution and the civil war, a domestic parallel developed in Nicaragua to the nueva canción movement called volcanto. Important representatives of this movement were folk singer Carlos Mejía Godoy (born 1943) who also composed a “peasant fair”, “Misa Campesina Nicaragüense” (1975), and Duo Guardabarranco, who for a long time toured the world with lyrical songs of faith. Duon’s Katia Cardenal (born 1963) has been noted in Sweden for her interpretations of Evert Taube in Spanish.

The folkloric style of palo de mayo, popularized in the 1980’s through influences from soca and is today a lively dance music style. Reggae, reggaeton and other Caribbean styles are also very popular. Salsa artist Luis Enrique (born 1962) was involved in the development of the sentimental variant salsa romántica.