The Spanish war in Chile against the Araucans, an indigenous people who offered fierce resistance, is the basis of the colonial era’s first major literary work in Latin America: Alonso de Ercilla y Zúñiga’s historical epic “La Araucana” (1-3, 1569, 1578 and 1589). Ercilla gained many followers, some of them artistically significant. Another early literary endeavor was Jesuit patron Alonso de Ovalle, who wrote the “Histórica relación del reino de Chile” (“Historical Story of the Chilean Empire”, c. 1646), in his acclaimed description of the country’s beauty a kind of early tourist propaganda, written with the intention of attract European missionaries to Chile. 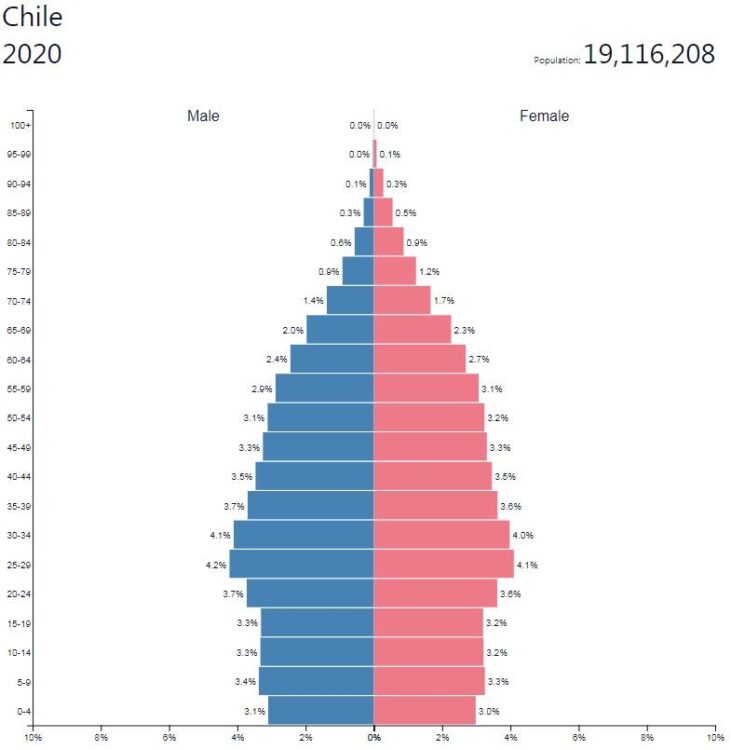 After the colonial liberation in 1818, cultural life was greatly influenced by Venezuelan writer Andrés Bello, a universal genius living in Chile 1829-65. The literary romance was shaped by volatile Argentine writers, including Sarmiento. El modernismo received no significant Chilean representative despite its presence in the country by its foreground figure Rubén Darío from Nicaragua. Chile’s own great poets first appeared in the 20th century with the influence of European avant-garde Vicente Huidobro and the two scales that would make Chile the first and so far the only country in Latin America with two Nobel Prizes in literature: Gabriela Mistral and Pablo Neruda. Chile’s reputation as a country of poets has been continued by Gonzalo Rojas, Nicanor Parra and Enrique Lihn.

In the middle of the 19th century, Chile got its first major novelist in the middle-class painter Alberto Blest Gana influenced by Balzac. In the 20th century, he had followers who in his novels explored the social reality in Chile: Augusto D’Halmar, Eduardo Barrios, Pedro Prado, Joaquín Edwards Bello, Manuel Rojas, Francisco Coloane and the more introverted María Luisa Bombal. Chile now has a number of very significant proseists: José Donoso, Jorge Edwards, Hernán Valdés, Antonio Skármeta, Ariel Dorfman and Luis Sepúlveda. These and many others have been on the run after the 1973 military coup, but by the end of the 1980’s most had returned. Pablo Huneeus was one of the socially critical writers who remained in the country during the dictatorship.

At the beginning of the 20th century, Chile had two significant playwrights, the socially engaged Antonio Acevedo Hernández, who described the conditions of the poor and oppressed, and the highly productive Armando Mook, who dealt with the conflict between city and country. The modern theater in Chile was developed through the creation of the Teatro Experimental de la Universidad de Chile in 1941 and the Teatro de Ensayo de la Universidad Católica in 1943. Social divisions and injustices in society have continued to play a central role in the leading playwrights, eg. María Asunción Requena, Isadora Aguirre, Fernando Cuadra, Egon Wolff, Sergio Vodanovic and Jorge Díaz.

Pablo Neruda has also contributed to the play, “Fulgor y muerte de Joaquín Murieta” (1967; “The Bandits Murieta’s Bravado and Death”), about the California gold rush. During the 1990’s, Ariel Dorfman received a major international breakthrough, especially with the play “The Girl and the Death” (1991), which was erected in i. USA and Sweden and filmed by Roman Polanski (“Death and the Girl”, 1994).

The first film screening in Chile took place as early as 1896, but it was not until 1910 before the first feature film was made: “Manuel Rodríguez” by Adolfo Urzúa Rosas (1863-1937). During the silent film period, 78 feature films were added. The greatest national success was Pedro Sienna’s (1893–1972) “El husar de la muerte” (1925) – yet another film about the Chilean freedom hero Manuel Rodríguez (1785-1818) – but few films reached the country’s borders.

From the breakthrough of the audio film around 1930 until the 1970’s, cinemas were dominated by films from the USA, Mexico and Argentina. The domestic production was modest and sporadic; One famous director’s name was José Bohr (1901–84). In the late 1960’s, a militant documentary film was developed, inspired by neorealism.

The years immediately preceding the election of Allende to the president of Chile emerged the first artistically significant feature film directors, characterized by both innovative willpower and social commitment. Miguel Littin then made one of the country’s most popular films of all time: “The Jackal from Nahueltoro” (1969). The more poetic-experimental Raúl Ruiz (1941–2011) achieved international success with “Tres tristes tigres” (1968). After the 1973 military coup, most of the directors of significance went into exile – Littin in Mexico and Spain, Ruiz in France – where they continued their operations. They often addressed the situation in their home country, as Helvio Soto (1930–2001) with his French-produced “It rains over Santiago” (1976).

Not until 1979 did the first feature film come under the new regime. Up to 1980, the Chilean directors in exile had recorded 29 feature films (21 by Ruiz alone), 15 short films and 46 short films. Only during the second half of the 1980’s did it become possible to make more or less regime-critical films, e.g. author Antonio Skármetas “Ardiente paciencia” (1985) and Gonzalo Justinianos (born 1955) public success “Sussi” (1987).

The high level of craftsmanship developed in the ancient Native American cultures of present-day Chile during pre-colonial times hardly affected early colonial art. Instead, as in recent times and in the rest of Latin America, it mainly reflects developments in Europe.

In the early 1800’s, among the style-makers, the French neo-classicist Monvoisin, but also Peruvian José Gil de Castro, who lived for a time in Chile and depicted all the heroes of the liberation struggle with Bolívar, was noticeable. The Academia de Bellas Artes was founded in 1849, and in the latter part of the 19th century dominated the romantic landscape painting with native names such as Ramírez Rosales and Francisco Gonzales.

In 1913, a group of painters gathered around Alvarez de Sotomayor. They broke with the French style ideal that dominated Chile’s art life ever since Monvoisin and also distanced themselves from Spanish influence. Some of the later school formations are the so-called Montparnasse group in the imitation of the Paris school and the Forties.

With Roberto Matta and Nemesio Antunez as inspirers, in the early 1950’s a number of young artists gathered, who sought to move away from naturalistic and figurative painting, and instead sought a compromise between abstract and a kind of poetic realism. In recent years, inspiration has been drawn from various international trends, while the development of society has given rise to an increasingly politically colored art. Graphic techniques have gained a lot of space. Prominent contemporary artists include José Balmes and Alfredo Jaar.

The ancient architecture was determined by culture and landscape. Stone and sun-dried mud dominated in the north, wood in the south. In the 15th century, parts of Chile belonged to the Incarctic, and the influence of the Inca was strong, especially in the north.

With the Spanish colonization then came the Spanish popular architecture. The characteristic Mediterranean courtyard around which the houses were formed became the main form of housing and public buildings.

In the 18th century, French and Italian architects introduced neoclassicism. The prime example of this is Santiago’s government building, designed by the Italian J. Toesca and built in 1785–90. After independence in 1810 and the economic boom through the mine exploration, the building of French influence was marked. Finished buildings were also imported (railway stations; several churches built by Eiffel, etc.).

A few years after World War I, functionalism was introduced and an international school based on room design, means of expression and technology applied to the whole world. This competed with the trend of creating a native architecture, inspired by colonial forms. Major representative of the latter was Roberto Dávila.

Urbanization meant major transformations of the country’s cities after World War II, and Chile became an experimental field for most of the modern and postmodern schools. Works by Emilio Duhart (UN Office in Santiago, 1960), Christian de Groote, Pedro Murtinho and Enrique Brown have attracted international attention in the 1990’s.

The music life revolved around the churches and salons for a long time. Towards the end of the 19th century, interest in choral and orchestral music increased, while nationalist features were mixed with both romanticism and impressionism, the latter by, among others, Pedro Humberto Allende (1885–1959).

In the 1920’s, the conditions for music life, especially in Santiago, were improved by the founding of the National Conservatory and several orchestras and music companies. Nationalism became less prominent at this time, among others at Domingo Santa Cruz (1899–1987), whose works are more neoclassical. Juan Orrego-Salas (born 1919) is one of the internationally known composers, and Gustavo Becerra-Schmidt (1925–2010) can also be mentioned. José Vicente Asuar (born 1933) is a well-known name in electronic music in Germany and the United States.

In the Mapuche Indians the ritual music can be noticed. Typical instruments are the drum cult trumpet and the long trutruka trumpet. In northern Chile, the Inca and Aymara influences are strong, with pan flutes and quena flutes, following the Spanish conquest accompanied by stringed instruments, including the small guitar charango.

The music of Spanish origin has in some areas retained older features, such as the song styles tonada, versos a lo humano and a lo divino, and instruments such as the great guitar guitar and fiddle rabel. In the early 19th century, the 6/8 dance cueca spread, which became incredibly popular.

An urban and romanticized form of folk music (música tipica), often with patriotic themes, developed during the 1930’s and in the mid-1900’s gained status as a national symbol, with names such as the singer Ester Soré (1915-96) and the still active group Los Huasos Quincheros (formed 1937). Singer Rosita Serrano made a career in Germany and Sweden during the 1930’s and 1940’s with South American songs and beats.

The internationally widespread folk renaissance of the 1950’s gave impetus to the politically reformist movement of the 1960’s, La Nueva Canción Chilena (‘The New Chilean Vision’), which criticized the idealized image of popular culture and in poetic forms highlighted the injustice of society (‘with the guitar as a weapon’). “). Folklorist and violin singer Violeta Parra was one of the pioneers of the movement. Nueva canción also evolved in other Latin American countries and gained reverberations in Europe, but was countered with violence by the dictatorship regime of the 1970’s and 1980’s; the poet Víctor Jara was murdered and many, like the group Inti Illimani (formed in 1967), were forced into exile.

Chilean rock got its first appearance in the 1950’s and 1960’s under the name nueva ola (‘new wave’), a general term for early rock and pop in several Latin American countries. Under the influence of nueva canción, a progressive fusion rock began to emerge with groups such as Los Jaivas (formed in 1963), but when the dictatorship regime banned rock music the development slowed. Many banned artists, like the socially critical band Los Prisioneros (formed in 1983), got spread via homemade cassette tape copies.

During the 1990’s, commercial entertainment in Chile exploded; Ironically, the alternative rock group Los Tres (formed in 1987) became one of the most popular.

Since the turn of the millennium, Chilean popular music has gained a great international reputation, especially in the Spanish-speaking world, through artists such as the indie group Los Bunkers (formed in 1999), multi-artist Francisca Valenzuela (born 1987), rapper Ana Tijoux (born 1977) and the pop-up in Sweden. – and hip hop artist Méndez (really Leopoldo Jorge Méndez Alcayaga, born 1975). Chilean electronic music has a world-leading position with the front figure Ricardo Villalobos (born 1970).

Since the 1960’s, cumbia has been an important part of Chilean mainstream pop and is today mixed with hip-hop, techno and other styles.