Costa Rica got its own literature unusually late for Latin American conditions. It was not until 1830 that the first printing business began. The writers who appeared in the latter half of the 19th century can be divided into two groups: an aesthetic-cosmopolitan and a realistic-regional. The latter, which came closest to reality, became the most viable, and its chief representative was Manuel González Zeledón, known by the pseudonym Magón. He described the capital of San José, its privacy and public, its poverty and parties, its love stories and everyday life. A major philosophical poet at the beginning of the 20th century was Roberto Brenes Mesén, while the realistic novel was developed by Joaquín García Monge, who also portrayed Costa Rica’s countryside. 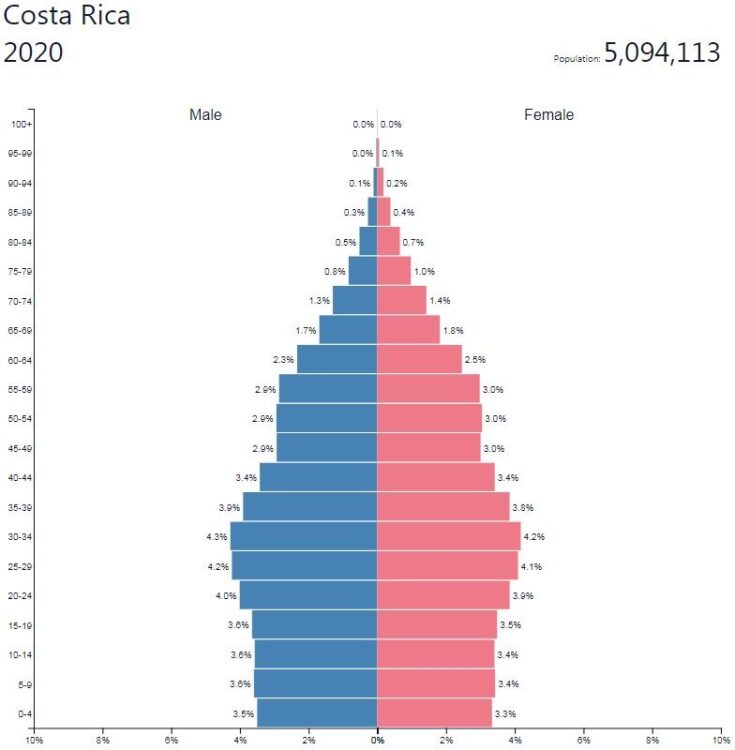 Costa Rica has a rich theater tradition with many theater companies, directors, scenographers and actors. In addition, there have been numerous international contacts, which is reflected in the repertoires. Leading domestic playwrights are Alberto F. Cañas, Daniel Gallegos, Samuel Rovinski and Antonio Iglesias. Satire and social debate characterize a large part of the works.

From the 1600’s, the ruins remain after the church in Ujarrás. Buildings from the 18th century are the church in Orosi (1766), in Baroque style, and the church in Heredia (1797), in neoclassical style. The Guadalupe Church (1810) in Cartago shows the influence of the Mudéjar style (Arabic style). Neoclassicism dominated architecture in 19th-century San José, for example. Comandancia, Palacio Nacional and Teatro Nacional (1897).

Orquesta Sinfónica Nacional de Costa Rica (founded in 1940) is one of the most renowned symphony orchestras in Latin America. In connection with this there is a state-supported youth orchestra.

The National Museum houses a large collection of pre-Columbian ocarinas, and the originally African marimban is widely used in folk music groups, but otherwise dominates European instruments such as guitar, mandolin and accordion.

Costa Rica has a diversified musical life but has not developed any specific genre of its own. Salsa, merengue, cumbia, texmex and other styles from the Caribbean, Colombia and Mexico are popular, especially with the mature audience. Reggae and calypso are great on the Atlantic coast. Young generations listen to Anglo-American rock and techno, but in the vibrant dance culture of cities, most Latin American rhythms prefer.

The indigenous rock developed in the late 1980’s with José Capmany (1961–2001) as a foundational figure. Among the most well-known groups are Gandhi (formed in 1993) and Malpaís (formed in 1999), which, with its romantic folkloric style, is also popular outside the country. Costa Rica is today an important stage for metal rock.

Jazz is also a great genre with the internationally acclaimed jazz group Practitioner (formed in 1994). An experimental and cross-genre composer and musician is Adrián Goizueta (born 1951).