Guatemala’s first great poet, Rafael Landívar, wrote in Latin. He was one of the Jesuits expelled from the Spanish colonies in 1767. In Italy, Landívar wrote on the hexameter “Rusticatio mexicana” (‘Mexican Country Life’, 1st edition with ten songs in 1781, 2nd edition with fifteen songs in 1782), a poem cycle about the industriousness and virtues of the Indians and on the beauty of nature in Guatemala and Mexico. Great interest in the indigenous peoples and their culture was shown by the monk Francisco Ximénez, who wrote a “History of the Indigenous People of the Province of Guatemala” (“History of Native American Origin in the Province of Guatemala”), published in 1856. 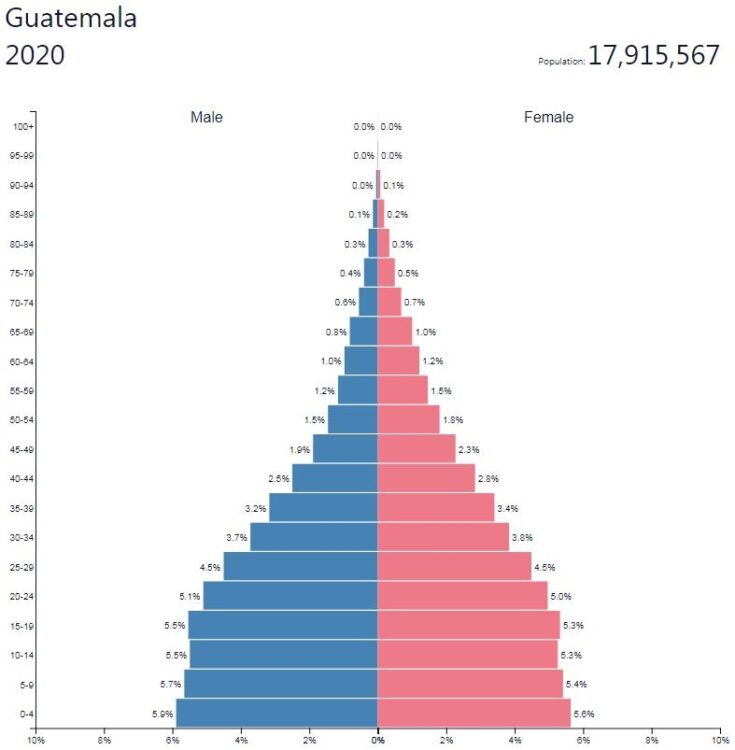 The foremost prose writer during the 19th century in Guatemala was Salomé Jil, an anagram for José Milla, who wrote both historical novels and “Cuadros de costumbres” (“Genre Pictures”), in which he created a popular literary figure: Juan Chapín. Enrique Gómez Carrillo became very stimulating for cultural life through his familiarity with European culture and through his many journeys around the world which he presented in essays books. Spanish American modernism, whose central figure, Rubén Darío, came from nearby Nicaragua, also had its representatives in Guatemala and was further developed in both poetry and prose by Rafael Arévalo Martínez.

The Native American heritage from the Mayan culture is very strong in Guatemala and has been particularly highlighted by Miguel Angel Asturias, who conducted in-depth studies on the subject in Paris in the 1920’s. resulted in his “Leyendas de Guatemala” (“Legends of Guatemala”, 1930). Through his magical realism, Asturias has exerted a great influence on the prose literature not only in Guatemala but also in the rest of Latin America. His poetry, less well-known internationally but very extensive and of a dazzling, intense beauty, rooted in Mayan culture, has been of great importance to later generations of poets in Guatemala. At the same time, the pull of social protest has remained prominent in the country’s literature.

The usually extremely brutal political conditions in the country – with a democratic bracket of 1944–54, which came to an abrupt end through a US-backed invasion – have left its mark on literature and the lives of authors. Social critics such as the poet and essayist Luis Cardoza y Aragón and novelists Mario Monteforte Toledo and Augusto Monterroso have lived so long in exile that they are sometimes considered Mexicans, even though their works are deeply rooted in Guatemalan reality.

Poetry in Guatemala has often protested against oppression and injustice. In 1940 Grupo Acento, with Raúl Leiva, formed literary and politically radical currents in Guatemala. The political tendency was reinforced by the somewhat later Grupo Saker-Ti with Humberto Alvarado at the forefront. Grupo Nuevo Signo with the magazine La Gran Flauta and poets Julio Fausto Aguilera and Luis Alberto Arango was strongly marked by his indignation over the US-supported invasion of Guatemala in 1954 and the subsequent terrorist regime. Several young writers have joined the armed struggle against oppression. Two of Guatemala’s leading poets have been tortured and murdered by government forces: Otto René Castillo 1967 and Roberto Obregón 1971.

Even in the theater, Asturias has played an important role. Several of his works have been dramatized and he has also written original plays dealing with social inequality, Native American myths and confrontation between Native American and European views of life. Another socially engaged playwright is Manuel Galich, who founded a Teatro Experimental in Guatemala.

After the Spanish conquest, the mainly church art was characterized by the European Baroque. The polychrome wooden figures were performed by native craftsmen, often with some local features. At the beginning of the 19th century, at the same time as the country’s independence, neoclassicalism, which was to dominate throughout the century, was introduced. Around 1900, artists such as Rafael Rodríguez Padilla and Carlos Valenti were influenced by Impressionism.

In the 1920’s there was a strong interest in the local tradition with roots in pre-Columbian cultures. Several artists traveled to Europe, and after their return they integrated elements of European modernism in their works with elements drawn from the tradition of indigenous cultures. The most renowned was Carlos Mérida, who later was active in Mexico. Other of these artists were Roberto Mishaan, Roberto Ossaye and sculptor Roberto González Goyri.

Guatemala is part of the region where the Mayan culture, one of Latin America’s great pre-colonial civilizations, developed. Important places from the Mayan era in present-day Guatemala include Piedras Negras and Tikal. The Mayan building art reached its peak before the year 1000. Many facilities were developed, with temples and palaces built in a very advanced technology. Characteristic of the Mayan temples is a steep pyramid, or rather a temple foundation, crowned by a smaller temple. These facilities are arranged around farms and have such a spatial structure that they are often called acropolis.

During the colonial period, the country became the scene of fierce cultural confrontations, which resulted in the construction of a variety of churches and monasteries. For this work, the colonial power made use of the artistic skill of the local workforce. However, a strong Baroque influence is felt in these religious buildings. After independence in the 19th century, the European trend to return to classical austerity made its entry into architecture. In Guatemala this trend lasted well into the 20th century. An example of this is the Government Palace of Guatemala City, built in 1939–43.

Western art music appeared from the beginning of the 16th century, mainly at the cathedral in the capital, which became an important musical center. Italian opera became famous in the 19th century. Among the creators of the 20th century a national art music with roots in folk music are Luis Felipe Arias (1870-1908) and the brothers Jesús Castillo (1877-1946) and Ricardo Castillo (1891-1966). The composers Enrique Solares (1911–95) and Jorge Sarmientos (1931–2012) worked with serial techniques. A central figure in contemporary music is the postmodern composer and music researcher Dieter Lehnhoff (born 1955).

Among the Mayan people, many non-European features remain, such as agricultural rites and dance dramas, and instruments such as the “wear drum” tun (equivalent to the Mexican teponaztli) and the flute xul. Of obvious Spanish origin is the popular style son guatemalteco, which can be performed by groups consisting of different guitar types, by zarabandas where often rabel- fiddles, bandurria and harp can be included, or by groups with different types of marimba (xylophone).

When the chromatic marimban was launched around 1900, the number of marimba groups whose repertoire is still playing exploded. In the US and Europe, the marimban began to be used early to create an exotic sound in strokes.

During the 1940’s, romantic popular songs were broadcast via radio, including Guatemala’s most famous drum, “Luna de Xelajú”, by singer Paco Pérez (1917–51). A contemporary singer / songwriter is the famous Ricardo Arjona (born 1964) all over Latin America.

In Guatemala’s rich and active music life, many Latin American genres such as mariachi, salsa, bachata, punta and cumbia are practiced today. Also a lot of rock and hip hop is created.

Among the most famous rock bands are Alux Nahual (formed in 1979) and Bohemia Suburbana (formed in 1992). Since 2006, the rock has no support from traditional media, which has generated a great underground culture.