Jamaica’s literature is characterized by linguistic mixes and oral tradition that survive in the performance of poems and in close connection with popular forms of music. Recurring themes are cultural clashes, race problems and poverty, ie. the consequences of a cruel colonial history, of slavery and exploitation. The oldest literature was written by white colonizers. The exception was Francis Williams (1700-70), a free black man who received European education and who wrote poems in Latin and English. 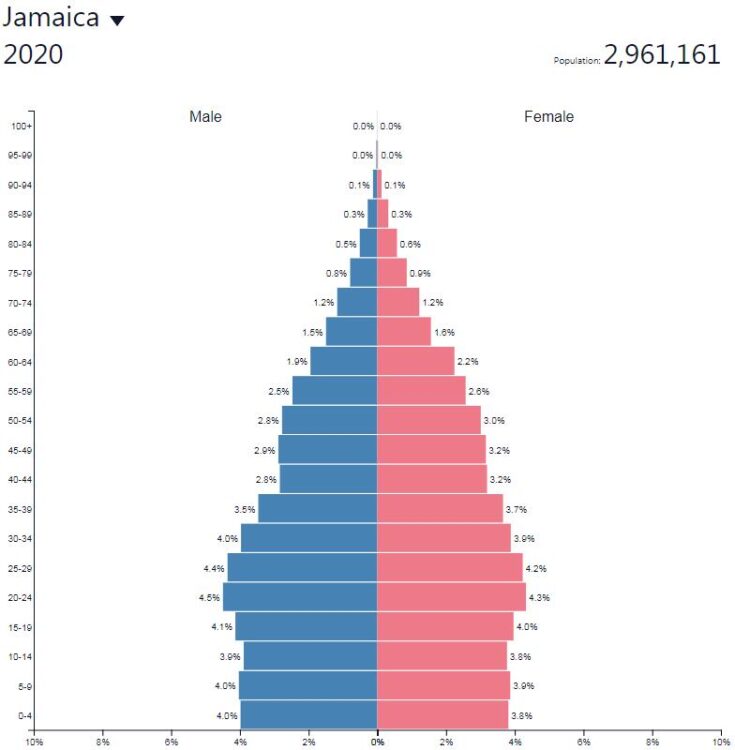 Claude McKay appears with e.g. “Banana Bottom” (1933) as the first black novelist. He also published the first two collections of poems in the West Indies (1912). Later came the novels of Vic Stafford Reid, characterized by a historical grasp, of Roger Mais, characterized by social realism and a tragic vision, of John Hearne, who in a sensibly close manner embodies individuals and landscapes, and of Andrew Salkey with a keen eye for people’s lack of reason.

Among the proseists of today are Erna Brodber and Olive Senior. The first female poet in the Caribbean is Una Marson. She is followed by Louise Bennett, who has stimulated the young generation to innovative use of vernacular language with its association of crazy-fun entertainment and serious satire such as at Linton Kwesi Johnson and Lorna Goodison.

Jamaica’s music mainly has African and European roots. African music style with drum ensembles and fast alternations between singer and choir can be found in the kumina cult, among others. In the Zion and Revival Baptists sects, there are choir songs with style features from African music and European revival songs. The rastafarian music combines choral singing with wind instruments, drums and other rhythm instruments.

Among the profane music is the music of the carnival-like ion-dance performances played on bamboo flute and drums of European type. Likewise, the four-beat mento music with strong emphasis on the last beat, played on accordion, guitars and drums.

Work songs, like “Banana Boat Song”, and mento style songs, like “Yellow Bird” became part of the international popular music repertoire in the 1950’s, when they were launched by Harry Belafonte.

In the 1960’s, several popular music styles in Jamaica developed from a combination of mainly rastafari music and rhythm & blues from the USA. Most famous of these are skins, with the hit song “My Boy Lollipop”, and above all reggae with its various variants and with Bob Marley as the leading name. Disc jockeys with mobile discos began to talk rhythmically about recorded rhythms in the 1970’s. These so-called toasts later became the starting point for ragga and in the USA rap music.

Jamaican popular music has been innovative since the 1970’s through the disc jockey-based and electronically produced music. A form of reggae called dub, which is based on remixes, emerged in the 1970’s with the front name King Tubby (1941–89).

Since the 1980’s, the largely electronic dancehall genre, with the hip-hop-influenced subcategory ragga, has become dominant, with names such as Yellowman (born 1956), Shabba Ranks (born 1966), Lady Saw (born 1972) and Buju Banton (born 1973). The genre has been criticized for vulgar lyrics with sometimes homophobic content. A related mixing form is reggae fusion. In contrast to these newer genres, today’s classic reggae is denoted by socially critical and sometimes religious texts for roots reggae.