Guyana’s multicultural reality is reflected early in its literature. One example is the black 19th century poet Simon Christian Oliver, who in his poems protested against slavery. He is one of the authors featured in Norman Cameron’s important anthology “Guianese Poetry: 1831–1931” (1931). The poet AJ Seymour’s magazine Kyk-over-al (1945–61) became an important forum for literature in Guyana. Edgar Mittelholzer, with his extensive novel production in the years 1941-65, greatly contributed to the creation of a genuine national and historical consciousness, especially in his Kaywana novels, which span the period 1612–1953. 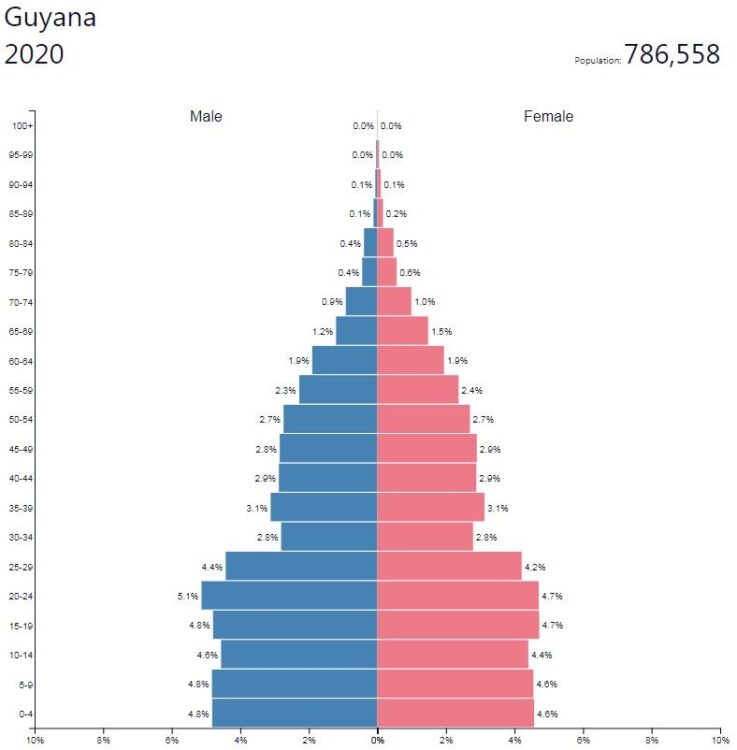 The Dutch who arrived in the area in the early 17th century built fortifications such as Fort Nassau (1627) on the Berbice River. The British conquered Guyana and founded Georgetown in 1781. Many of the buildings in the new capital were erected in Gothic style, which was also found in English colonies in the nearby Caribbean; one example is the Church of Saint Andrew (1818). The nearby parliament building in brick, on the other hand, was built in the neoclassical style, with central dome and Doric columns. One of Georgetown’s best preserved wooden buildings is the Smith Congregational Church (1841). Around the middle of the 19th century, Georgetown Seaman’s Hospital (1838) and State House, Governor’s Residence (1854) were built. Later, Stabroek Market was built with steel structure (1881), City Hall (1888), City Engineer’s Office (1890),

The domestic architects were influenced by modern international architecture after 1950. The University of Guyana (1963) and later the National Insurance Scheme (1967) and the National Cultural Center (1976) were built in the capital.

For colonial historical reasons, the music of Guyana is similar to that of the Caribbean islands of Trinidad. Indian popular music (filmi git) and music for Hindu parties dominate among the people of Indian origin. African Americans perform, among other things, Guyanese forms of drum dances and calypso, both sung to an orchestra and played by steel bands.

The southern people of southern Guyana mainly have vocal music, sometimes accompanied by rattles and more, of the same type as the other indigenous peoples of the Amazon.

Calypso is the dominant style of music. Other popular styles are reggae and the Indo-Caribbean chutney music with singer Terry Gajraj as one of the biggest names. In the 1990’s, musician Eddy Grant (born 1948) created the Caribbean mix style ringbang.